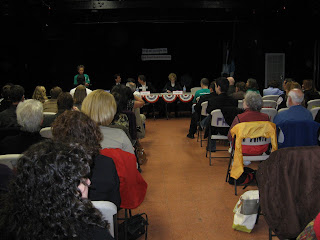 This was the first time all four candidates spoke together in San Francisco. There is a different dynamic now that Joe Nation is in the race from Marin. Especially since a poll just released showed Joe Nation in first place. It also gave Mark Leno the opportunity to say "both Joe's are right"!

The debate was moderated by Philip DeAndrade (Goat Hill Pizza). DeAndrade started out by saying " I feel like Wolf Blitzer in Cooper Anderson's body".

Assemblyman Mark Leno started out right off the bat talking about Carole Migden's campaign funding (when you are trying to get as many San Francisco votes as possible - I guess you attack). He said he would be accessible, respectful and accountable.
State Senator Migden defended herself talking about free speech and stating that she passed more bills then anyone else, gets more things done then anybody else and sometimes throws her "elbows" to get things done.
Joe Nation talked about climate change being his number one issue along with working on the budget to make sure school funds are not cut. Believes in universal health care.
Joe Alioto Veronese said that the job of State Senator was not easy. The question to be asked is "what change means to you". He would go after Lenar Corporation and put the head of HUD in in prison. He wants to make a difference.
Questions asked were about infrastructure, the Golden Gate Bridge, the power plants in San Francisco, transportation, the helicopters in Mission Bay and General Hospital and health insurance.
The addition of Joe Nation takes some of the animosity away from the Leno/Migden battle so the candidates are focusing on real, difficult issues.
All four of these people are excellent, intelligent, hard workers - it is a shame they are all running for the same office.

*Assembly Candidates Forum (19th District): Papan, Hill and Holober
When: March 5, 2008
7 p.m.
Where: Carpenters Hall, 1153 Chess Drive, Foster City, Ca.
What: San Mateo Democracy of America. Meet the candidates who will be competing in the June primary to the California Assembly for the 19th District.
Information: info@smcdfa.org

March 5th through the 8th - Wednesday through Saturday


Dee Dee Myers - "Why Women Should Run the World" Myers was appointed the White House press secretary for Clinton. She holds the distinction of being the first women and second-youngest person to occupy the position. Commonwealth Club 11:30 a.m. $15 non-members 595 Market Street, 2nd Floor S.F. Information: club@commonwealthclub.org

NOPA Networking -( North of Panhandle Association)
When: March 6, 2008
Thursday
6 to 8 p.m.
Where: Madrone Lounge (Divisadero at Fell).
What: Networking and fun. Joint friends and neighbors at Madrone Lounge. No cover charge. Look for for Kandace Kaylor and an area reserved for NOPNA.
Information: leela@nopna.org

The Past is Present: Six Decades of PCC Streetcar Service in San Francisco
When: March 6, 2008
Thursday
6 to 7:30 p.m.
Where: San Francisco Main Library
100 Larkin Street (at Grove). S.F.
What: Special presentation that captures the robust transit service provided by streamlined streetcars from the 1950's through the 1980's. Angelo Figone will present rarely seen images of streetcars from public and private collections. Cosponsored by the San Francisco History Center
Information: 415-557-4400

Conference on the Criminalization of Poverty
When: 2 p.m to 5 p.m on Thursday and 9 am. to 6 p.m. on Friday
Where: Boat Hall, UC Berkeley
What: Symposium will provide a place to discuss the problems and launch an in-depth look at the impacts of this trend on poor people and the U.S. society as a whole. Co-sponsored by the Thelton E. Henderson Center for Social Justice, UC Berkeley
Information: Usree Bhattacharya at ubhattacharya@berkeley.ed or call 642-0813
Source: Tenderloin Futures Collaborative

Alice B. Toklas LGBT Democratic Club meeting and endorsement vote
When: Monday March 10, 2008
6:30 p.m. to 8 p.m.
Where: LGBT Community Center, 1800 Market Street @ Octavia.
What: Endorsement vote for June primary. There are a number of state and local initiatives and candidates on the upcoming ballot. Alice has already endorsed Mark Leno for Senate and Tom Ammiano for Assembly.
Note: Alice's PAC will meet the day prior to the endorsement vote on the 10th to make recommendations for the general membership. For those candidates and speakers of ballot initiatives who wish to participate, please email info@alicebtoklas.org and fill out the questionnaire on the website by Wednesday, March 5th.

*SPUR - Instruction, Innovation and Social Justice in San Francisco's Schools.
When: March 11, 2008 Tuesday
12:30 to 1:30 p.m.
Where: 312 Sutter Street, Suite 500, S.F.
What: How do our instructors teach the San Francisco values of innovation and social justice in an environment dominated by state-mandated testing? Join Tony Smith, the San Francisco Unified School District's Deputy Superintendent for Instruction, Innovation and Social Justice, for a discussion about the curriculum directing the education of our children in pubic schools.
$5. for non-members
Information: info@spur.org 415-781-8726


United Educators San Francisco - Rally and March
When: March 11, 2008 - Tuesday
4 p.m.
Where: In front of the State Building at 4 p.m.
What: Join educators and parents across the state. Rally is a message to the Governor and the State Legislature that the educations cuts are absolutely unacceptable.
Information: 415-956-8373 www.uesf.org
Source: Left in San Francisco

Reception celebrating the work of the UCSF Mission Bay Community Task Force:
When: March 12, 2008 - Wednesday
5:30 to 7:30 p.m.
Where: Goat Hill Pizza
300 Connecticut @ 18th Street
Potrero Hill, S.F.
What: UCSF recently partnered with the Community Advisory Group to convene the Mission Bay Community Task Force for the purpose of examining the impact of UCSF's future development on the City's eastern neighborhoods. This reception is a way to demonstrate UCSF's appreciation to the Task Force members and other neighbors for their dedication and commitment to this process.
Information: RSVP commuity@cgr.ucsf.edu or call Erin Escobar at 415-502-0878 by March 10th.

SPUR - How set-asides affect the city budget
When: March 13, 2008 Thursday
12:30 to 1:30 p.m.
Where: 312 Sutter Street, 5th Floor, S.F.
What: Are set-asides good or bad? Are there alternatives? And if not, how can we reform set-asides? Join former budget director Bob Gamble and current budget analyst Greg Wagner as they explore these issues and share the recommendations laid out in SPUR's report on how to reform set-asides.
Information: info@spur.org 415-781-8726

*Open Space Task Force
When: March 13, 2008, Thursday
4 to 6 p.m.
Where: Bayview Opera House, S.F.
What: The Task Force will look at how to get funding for development and maintenance of new and existing open space.


San Francisco for Democracy - Meeting on national single-payer health care plan (HR 676). This meeting will offer information on HR676, the plan introduced by Rep. John Conyers:
When: March 15, 2008, Saturday
3 to 5 p.m.
Where: To be announced
Information: communications@sf4democracy.com

Rules on voting are complex. Go to www.cadem.org for latest information. Meeting open to public. Information could change:
Candidates need 70% of the votes cast to secure a place on the State Convention Consent Calendar. This is a public vote. A single roll call vote via signed written ballot, in the same form as the absentee ballot, shall be taken. If you cannot attend the conference in person, the VBM ballot in voter packet must be mailed or delivered only to the Regional Convener responsible for the district. VBM ballots which are late or are delivered to the wrong Regional Convener are not valid. Once received by the designated Regional Convener, a ballot, absentee or otherwise, may not be retracted, rescinded, or otherwise changed and shall be counted in the totals. Proxy voting is not allowed.
The names of the voters for each district will be read aloud and the conference secretary will read the vote cast in accordance with the signed vote-by-mail ballot that was received by the Regional Convener.
At the end of the roll call, the votes for each candidate and for "no endorsement" will be tallied.
Should a candidate receive the 70% of the vote, s/he will be recommended candidate for endorsement. Such recommendations will go on the Consent Calendar to be ratified at the State Convention on Sunday, March 30, 2008, at the San Jose Convention Center.
If no candidate receives the required 70%, the conference shall have taken the position of "no recommendation" for endorsement.
If one candidate received over 50% for a district, the race will go to the caucuses held during the March convention.

*San Francisco4Democracy PAC Candidates and Ballot Initiatives Forum for June 2008 Election
When: March 16, 2008 Sunday
11 a.m. to 2 p.m.
Where: SFPD Northern Station, Community Room, 1125 Fillmore Street between Turk and Golden Gate
What: Invited candidates for June 2008 local and state races, including State Senate, plus selected proponents or opponents of ballot initiatives will answer questions. Meeting is open to the public. This meeting of the SF4D PAC, whose coordinators will make recommendations for the general membership at a subsequent meeting.

SPUR - Megaregions
When: March 19, 2008 - Wednesday
8:30 to 10:30 a.m.
Where: 312 Sutter Street, Suite 500
$5. non-members
What: Join co-hosts SPUR and the Regional Plan Association, a metropolitan planning group based in New York City, for this discussion about the growing need for megaregional planning in the US. Moderated by RPA president Robert Yaro, the panel will address the environmental, transportation, economic, equity and land use issues facing the Northern California megaregion. Participants include Gabriel Metcalf of SPUR, Jim Wunderman of the Bay Area Council and Carol Whiteside of the Great Valley Center. RSVP info@spur.org
Information: info@spur.org 415-781-8726