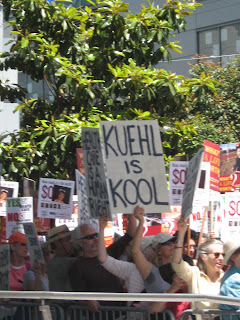 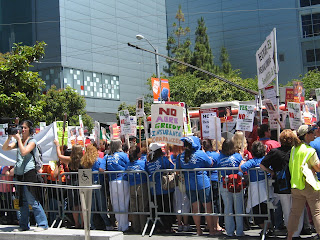 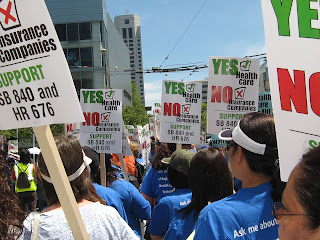 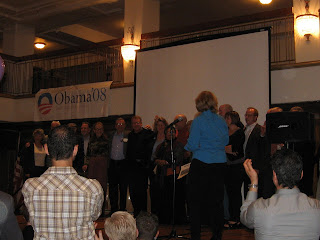 Huge rally for "single-payer health care" and against insurance companies outside Moscone Center during America's Health Insurance Plan Convention.
The rally featured State Senator Sheila Kuehl speaking on behalf of SB 840 and HR 676. Dennis Kelly and Supervisor Tom Ammiano also spoke.
This was a very exuberant crowd (it was so hot!). People driving by were honking in approval (including a fireman in a fire truck on a way to a fire!).

Wednesday night was the 30th Anniversary Harvey Milk LGBT dinner . Big, overflowing crowd which included Milk director Gus Van Sant , Sean Penn and the writer of the movie - Lance Black. Harry Britt (who does not usually speak in public anymore) spoke about the memories of Harvey Milk as did Gwenn Craig.
The Club honored Supervisor Tom Ammiano "Mr. Ammiano Goes to Sacramento" - enormous applause. The Club also honored City Attorney Dennis Herrera. There was huge applause for State Senator Carole Migden - I was glad she was there to hear the applause.
The best part of the evening was when Catherine Cusic brought up everyone in the audience who had worked for Harvey Milk . The people I recognized were Harry Britt, Gwenn Craig, Cleve Jones, Wayne Friday, Roma Guy, Denise McCarthy, Tom Ammiano, Maggie Rubenstein, Dana Van Gorder, Bob Dockendorf, Tim Wolford, Anne Kronenberg and Stafford Buckley.
Holly Near sang to the Harvey Milk film footage.
The Harvey Milk Democratic Club should be thanked for putting on this anniversary dinner. Over the years this Club has done an excellent job of preserving the history of the Gay, Lesbian and political community- inspiring new people just moving to San Francisco.
If you go to www.fogcityjournal.com you will see fabulous picture of the dinner taken by Luke Thomas.

Support the Letter Carriers at an Informational Picket
When: June 20, 2008 - Friday
4 to 7 p.m.
Where: Pacific Carrier Annex - 1199 Ortega @ 19th Street, San Francisco
What: Join NALC 214 for an information picket line to protest management's abuse and harrassment of postal employees.

Ring in Summer!
When: June 20, 2008 - Friday
6 to 7 p.m.
Where 8th Street and Howard
What: Get Free bike bell to ring in the Summer when you roll on by the SFBC Streetside Outreach Team. (SFMTA donated 800 bells!)
Information: kate@sfbike.org


* Former Congressman Pete McCloskey
When: June 21, 2008 - Saturday
9:30 a.m.
Where: Sharp Park Golf Course Restaurant., Pacifica, Ca.
What: Congressman McCloskey who ran for president in 1972 and has family connections to Pacifica's famous castle on the hill will speak at the Pacifica Democrats breakfast. He will talk about how political campaigning has changed since the 1960's. $12. full breakfast, continental breakfast $6, coffee-only $3.
Pacifica Democrats is San Mateo County's oldest political club. In was formed in 1949. Information: Jim Heldberg jimhpac@aol.com

*Supervisor Carmen Chu
When: June 21 - Saturday
Noon
Where: Green Earth Cafe, 1722 Taraval (between 27th and 28th Avenue) San Francisco.
What: Discussion about the campaign before hitting the streets to talk to voters in District 4.
Carmen Chu is running a campaign based on building community, by working together, we can tackle our toughest problems and create a better place to live. Prior to this meeting there is a Sunset Boulevard Clean up from 10 a.m. to Noon at Noriega and 37th (NW corner). The effort is to improve the walking paths along Sunset Boulevard.
Source and new website: carmenchu2008.com

Free Hugs!
When: June 21, 2008 - Saturday
2 to 5 p.m.
Where: Union Square
What: Meet next to giant heart. Hugs will be given out. Hosted by San Francisco Shenanigan.
Source: www.yelp.com

SPUR - Film Industry in San Francisco
When: June 25, 2008 - Wednesday
6 p.m. to 9 p.m.
Where: Sundance Kabuki, 1881 Post Street at Fillmore
What: Discussion about the film industry in San Francisco. Film indepth look at what draws and, in some cases repels, filmmakers from using San Francisco as their backdrop and its impact on the film. $20 non-members
Information and RSVP events@spur.org or call 415-781-8726 ext 120

*Robert Scheer and Daniel Ellsberg
When: June 25, 2008 - Wednesday
7:30 p.m.
Where: First Congregational Church, 2345 Channing Way, Berkeley
What: Robert Scheer talks with Daniel Ellsberg about his book "The Pornography of Power: How Defense Hawks Hijacked 9/11 and Weakened America". $5. tickets At Cody's or free with the purchase of the new book.

*Surge and Merge for Obama
When: June 28, 2008 - Saturday
4:30 to 6:30 p.m.
Where: El Valenciano Lounge/Club/Grill, 1153 Valencia (between 22nd and 23rd Street).
What: Time to learn how the California Obama campaign is taking shape and time to plan how you can do your part. Obama campaign volunteers will be hosting a thousand Unity Parties like this from coast-to-coast the same day for thousands of Hillary, Edwards, Richardson, Kucinich, Biden, Dodd and Gravel volunteers and supporters. Come be a part of this history-in-the making. This is hosted by Democracy Action member and Veterans Liaison Steve Noetzel, a leader in Veterans for Obama and 2004's Veterans for Kerry.

All About Eve
When: June 28, 2008 - Saturday
8 p.m.
Where: Union Square
What: Watch famous movie with Betty Davis on giant outdoor screen.

All items subject to change. Best to check before attending

Email: mission2894@gmail.com - email with any questions or comments , or if you wish to post any calendar items.