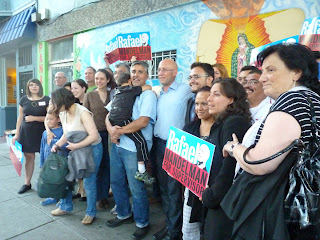 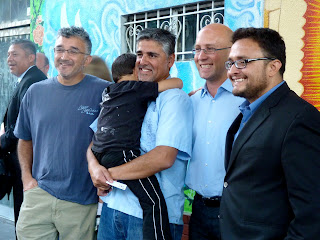 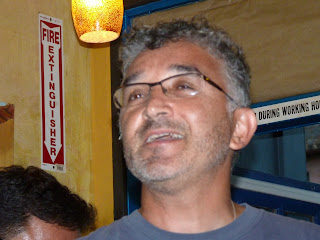 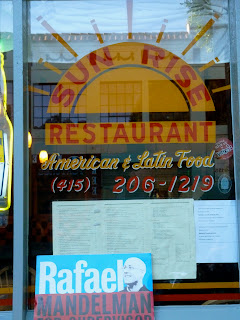 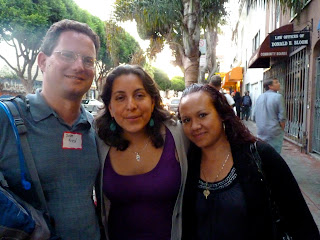 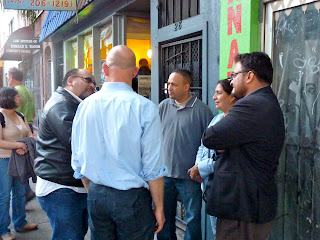 The event was co-sponsored by Supervisor John Avalos, Supervisor David Campos and the Grassroots Democratic Club with President Eric Quezada.

Rafael Mandelman asked for people's support in District 8 pledging to stand up for their rights in San Francisco.

Supervisor John Avalos said   "Rafael has been there". He  has  leadership we need to have on the Board of Supervisors".

Supervisor David Campos said "This election is critical for the future of the Board of Supervisors.  This election matters.  There is a clear choice - Rafael Mandelman"

*Diane Wesley Smith - Register to Vote-by-Mail or Vote in Person
When: September 26, 2010 - Sunday
Noon to 3:00 p.m.
Where: The Obama Meeting Place/DWS BVHP Realty, 4636 Third Street @ Newcomb  Avenue, San Francisco
What: BBQ for everyone who registers to vote or updates their voter registration.  We need as many Democrats registered to vote as possible.  This is a Safety, Dignity @ Respect event.
Diane Wesley Smith - candidate for Supervisor in District 10.
Information: dianewesleysmith.com

*Central Freeway/Octavia Blvd. - Study Open House and Public Workshop
When: September 27, 2010 - Monday
Open House: Noon to 2:00 p.m.
Public Workshop: 5:30 p.m. to 7:30 p.m.
Where: SFCTA Hearing Room, 100 Van Ness Avenue, 26th Floor, San Francisco
What: Open house and public workshop to learn more about the Central Freeway and Octavia Boulevard Circulation Study and give your feedback. The Study will evaluate the performance of the transportation system in the Market-Octavia area and recommend changes for improving travel options and traffic distribution in he area.
Information: sfcta.org/octaviacirculation

*Youth-Led School Board Candidates Forum
When: September 27, 2010 - Monday
5:00 p.m. to 7:00 p.m.
Where: Mission School (open to everyone), 3750 18th Street, San Francisco
What:  Your voice, your schools.  Your Board of Education.  Come out and ask the candidates about the issues that are the most important to you.  Event will consist solely of two hours of questions from the youth.  Ask the candidates how they will make your educational experience the best it can be.

Recording Academy of San  Francisco - Candidates Forum
When: September 27, 2010 - Monday
6:00 p.m. to 9:00 p.m.
Where: Yoshi's, 1330 Fillmore Street, San Francisco
What: Candidates forum focused on the concerns of the city's music and entertainment industry.  Candidates seeking office  in District 8, 6 and 10 are expected to attend.

* San Francisco Board of Supervisors
When: September 28, 2010 - Tuesday
2:00 p.m.
Where: City Hall, Room 250, San Francisco
What: Item from the agenda:
Establishing an Alcohol Cost Recovery Fee.
Sponsors: Avalos, Mirkarimi, Maxwell, Mar, Daly and Campos
Shall this ordinance be approved over the Mayor's veto?
Information: sfbos.org

*James Keyes - Cocktail Party and Fundraiser
When: September 29, 2010 - Wednesday
5:30 p.m. to 8:00 p.m.
Where: James Keyes headquarters, 456 Ellis Street, San Francisco
What: Office cocktail party and fundraiser.  This event will allow people the opportunity to see the new headquarters and meet the candidate for Supervisor in District 6, James Keyes.
Information: jameskeysdistrict6.com

*Debra Walker - Comedy Jam
When: September 29, 2010 - Wednesday
6:00 p.m. to 9:00 p.m.
Where: Glas Kat, 540 4th Street, San Francisco
What: Come join the Artist community in support of Debra Walker for Supervisor in District 6.
Warning!  We are not liable for any damages that occurs from laughing to hard!
Bay Area's Finest Artist:
Information: votedebrawalker.com

Talk Education with Winifred Dajani at Medjool
When: September 30, 2010 - Thursday
7:00 p.m. to 9:00 p.m.
Where: Medjool, 2522 Mission Street, San Francisco
What: Fundraiser for Winifred Dajani, candidate for school board.  Appetizers and drinks will be served.  Suggested contribution $100. per person
Information: winifreddajani.com


*Bert Hill for Bart Board 2010 Meet and Greet Happy Hour
When: October 1, 2010 - Friday
5:00 p.m. to 7:00 p.m.
Where: Holy Grill SF, 659 Townsend Street, San Francisco
What: Please come and join Bert Hill, candidate for Bart Board in District 8,  for Happy Hour and snacks.  Your vote and donations are appreciated.
Information: bert4bart.org


*Sidewalks are for People Houseparty Fundraiser
When: October 2, 2010 -  Saturday
2:00 p.m. to 5:00 p.m.
Where: Bernal Heights, San Francisco (location given at time of RSVP)
What: Sidewalks are for people.  Support the Campaign Against Sit/Lie Initiative. - No on Prop L. Enjoy a lovely Saturday afternoon with co-hosts Supervisor David Campos and Supervisor John Avalos.  Refrescos, delectables, books and art raffle.
Framing the campaign against Sit/Lie as a current civil rights issue - special guests: Elaine Elinson and Stan Yogi, authors of "Wherever There's a Fight, How Runaway Slaves, Suffragists, Immigrants, Strikers, and Poets Shaped Civil Liberties in California".
Fundraiser:  Sliding scale $25.-500.
In the garden of Jeffrey and Nate Miller and Amy Trachtenberg
RSVP: amytrachtenberg@mac.com or jmiller@millercomp.com


*Rafael Mandelman - Tenants for Rafael: A Party!
When: October 2, 2010 -  Saturday
2:00 p.m. to 9:30 p.m.
Where: 2231 Market Street, San Francisco
What: Tenants and tenants rights supporters gather to help Rafael Mandelman  become their supervisor.
There will be music and inspiring talk and a chance to sign up to help the campaign and contribute if you can.  Join the Mandelman campaign in an afternoon of activism, live music, good company, and rallying to preserve affordable housing in District 8.
Information: rafael2010.com


*Early Voting Begins - Early voting available at the Department of Elections office on the ground floor of City Hall Monday through Friday, 8:00 a.m. to 5:00 p.m. There will be early voting, on the weekends of October 23, 24, 30 and 31st.


Informative opportunity to network and meet those who share your concerns about the future of the city.
Wine, non-alcoholic beverages and snacks will be provided.
Information: plancsf.org


*Potrero Hill Democratic Club - Campaign updates
When: October 5, 2010 - Tuesday
7:00 p.m.
Where: Potrero Hill Neighborhood House, 953 Deharo, San Francisco
What:  Monthly meeting.  Representives from the various campaigns are being invited to bring their literature, say a few words and let you know how  you  can help.  You will get another chance to ask that burning question.
Information: phdemclub.org


Lynette Sweet - Sweet Neighborhood Townhalls
When: October 6, 2010 - Wednesday
6:00 p.m. to 7:30 p.m.
Where: Sulu Palega Park, 500 Felton Street, San Francisco
What: Town Hall meeting with Lynette Sweet, candidate for supervisor in District 10,  to discuss your questions and concerns about the neighborhoods in District 10.
Information:sweetforsupervisor.com


*New items added to Calendar as of September  26th.

Important: Items change - please check before attending event for any changes.
Please email events, comments or questions to sfpostnotes@gmail.com
-
Posted by Unknown at 10:43 AM 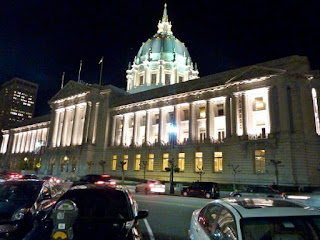 Talk Education with Winifred Dajani at Medjool
When: September 30, 2010 - Thursday
7:00 p.m. to 9:00 p.m.
Where: Medjool, 2522 Mission Street, San Francisco
What: Fundraiser for Winifred Dajani, candidate for school board.  Appetizers and drinks will be served.  Suggested contribution $100. per person
Information: winifreddajani.com


*New items added to Calendar as of September 20th.

Important: Items change - please check before attending event for any changes.
Please email events, comments or questions to sfpostnotes@gmail.com
--
Posted by Unknown at 7:41 AM