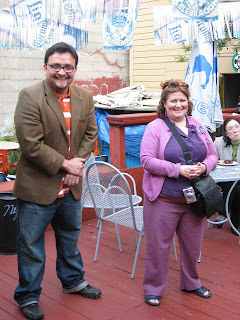 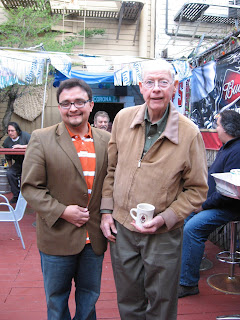 I was forwarded an invitation by Alexis Gonzales to a "meet and greet" for David Campos for Supervisor in District 9.
I had met David Campos very briefly at a Democratic Party event at the Mark Hopkins last year.
The barbecue event was held at Naps III out on Mission Street in the patio. Tami Bryant and her husband Carl Bryant sponsored the event. You could tell that the Bryant's care very much about David Campos and wanted to help him.

I was delighted to see Walter Johnson, one of the most lovable people in San Francisco - so funny! .

David talked about the responsibility of taking over from Supervisor Tom Ammiano, carrying on with passing legislation.(I believe Ammiano has endorsed Campos) David Campos feels he understands how San Francisco works and can get things done. The number one issue is "safety". He believes in police being part of the neighborhoods and knowing how to deal with the diversity in our community. He wants more affordable housing and is a advocate for a strong school system.

David Campos is an immigrant from Guatemala. He graduated from Stanford with a law degree from Harvard. He worked in the City Attorney's office, and is currently a San Francisco Police Commissioner and is on the San Francisco Democratic Central Committee. He is a volunteer co-chair of BALIF and is on the Board of Directors of San Francisco la Raza Lawyers Association.

Affordable Housing Alliance Political Action Committee
When: April 2, 2008 Wednesday
5:25 to 7:30 p.m.
Where: State Building, 455 Golden Gate Ave., S.F.
What: Endorsement meeting for the June election. Will interview the candidates and discuss the propositions.

Northeast Waterfront Advisory Group
When: April 2, 2008 - Wednesday
5 p.m.
Where: Port of San Francisco, Bayside Conference Room at Pier 1
What: Discussion on Port's disposition of Seawall Lot 351 for possible development. This is the present 2/3 acre parking lot on the corner of the Embarcadero and Washington Street. It is the parcel that San Francisco Waterfront Partners wishes to remove from under Public Trust control so they can build 170 condominiums and 500+ space underground parking garage. Friends of Golden Gateway are concerned about this proposal.
Information: Jennifer Sobol 274-0548 or jennifer.sobol@sfport.com

Jackie Speier
When: April 2, 2008 -Wednesday
5:30 to 7 p.m. (Jackie is expected to arrive at 6 p.m.)
Where: 34 Madrone Ave. (near West Portal Muni Station, between Taraval and Ulloa)
What: George Broder, Wendy Soone-Broder and Mary Jung inviteyou to an Open House to meet Jackie Speier Candidate for Congress.
Information: RSVP 415-333-4338

San Francisco Park Coalition Meeting
When: April 2, 2008 - Wednesday
6 to 8 p.m
Where: City Hall, Room 305, San Francisco, Ca.
What: San Francisco's failing playgrounds and how NPC is raising the grade. NPC is launching an initiative to raise failing grades of the City's worst playgrounds and will kick off this effort in April of 2008.
Prior to the playground presentation they will hold an overview of the Solar Subsidy Program.
Information: 415-621-3260

Hunters Point Shipyard and Candlestick Point Land Use
When: April 2, 2008 - Wednesday
6 to 8 p.m.
Where: CCSF Evans Campus at 1400 Evans, San Francisco
What: Organized by the Office of Economic and Workforce Development and the SF Redevelopment Agency, the workshops are designed to encourage comment on proposed land usage. The workshops will include an overview of the project led by the project architect.
Information: www.quesadagardens.org

*San Francisco Residential Architectural Styles
When: April 2, 2008 - Wednesday
6: 3o p.m.
Where: Poleng Lounge, 1751 Fulton @ Masonic.
What: Learn to identify and discuss San Francisco Residential Architecture. Is it a Queen Anne, an Italianate, a Stick or a Eastlake variant? Is it an Edwardian or is it a Craftsman? Is it Spanish Revival, Eclectic or Colonial. Join Architect James Dixon an Nopa resident and realtor Jennifer Rosdail for a lecture and slideshow. The lecture will be followed by a Q & A session regarding historically sensitive remodeling and restoration about buying and selling architectural masterpieces in today's challenging market.
Information: www.jenniferrosdail.com
Source: NOPNA

San Francisco For Democracy - Media streetfighting for progressives.
When: April 2, 2008
7 p.m.
Where: Schroeder's, 240 Front Street, S.F.
What: From the battle for the Presidency to the battle for Congress, we have seen that the mainstream media continue to take their talking points from the likes of Matt Drudge and Fox News. How can we fight back against determined and well-financed media efforts. Join the panel of media experts and community activists:
Stuart Gaffney and John Lewis, marriage equality activists
Josh Harkinson, reporter, Mother Jones magazine
Sasha Magee, webmaster/editor, Leftinsf.com
Also, discussion about how to respond quickly and effectively to smears, innuendos and other right-wing efforts.
Also, how, where and when to volunteer for your favorite campaigns on the June 2008 ballot. Also a earthquake preparedness tutorial from Dave Massen; and a report on the 2008 State of the Black Union symposium from Maxine Anderson.
Source: SF for Democracy. sf4democracy.com

Hunters Point Shipyard and Candlestick Park Land Use Meeting
When: April 5th, 2008 - Saturday
10 a.m.. to 12 p.m.
Where: Bayview/Hunters Point YMCA, at 1601 Lane, S.F.
What: Organized by the Office of Economic and Workforce Development and the SF Redevelopment Agency, the workshops are designed to encourage comments on proposed land usage.
Information: 415-749-2464 Thor Kaslofsky thor.kaslofsky@sfgov.org

Oakland Athletics
When: April 5, 2008 - Saturday
1:05 p.m.
Where: Oakland Coliseum, Oakland
What: All you Can Eat. for $20. To purchase discount ticket (normal $35.) visit
Information: www.oaklandathletics.com

2008 San Francisco Pedestrian Safety Summit
When: April 8, 2008 - Tuesday
9 a.m. to 4 p.m.
Where: City Hall, North Light Court, San Francisco
What: Join City Pedestrian Staff, advocates and experts in pedestrian safety and they discuss pedestrian safety initiatives and look to the future of walking in San Francisco. Information: www.sfmta.com/walk To reserve a boxed lunch RSVP by April 1, 2008 to 554-2398 or email liveable.streets@sfgov.org

Roger Mudd
When: April 8, 2008 Tuesday
5:30 P.M.
Where: Commonwealth Club, 595 Market Street, S.F.
What: Will speak about his book "The Place to Be" and will critique broadcast news today, especially political coverage. $18. non-members
Information: 415-597-6700 club@commonwealthclub.org

*Olympic Torch
When:April 9, 2008 - Wednesday
1 p.m.
Where: McCovey Cove by AT&T Park and travel north through Rincon Hill along the Embarcadero up to Fisherman's Wharf, around the Marina, back to Justin Herman Plaza by Embarcadero Center and the Ferry Building.

Nowtopia
When: April 9, 2008 - Wednesday
7:30 p.m.
Where: CounterPULSE, 1310 Mission Street, S.F.
What: "Nowtopia" new book by Chris Carlsson, director of Shaping San Francisco. Chris will read from his book and discuss the book's look at a new form of work politics. Party and refreshments afterwards. $20. at the door get you a book and a party and helps sustain CounterPULSE.
Information: info@counterpulse.org 415-626-2060

Single Payer Now!
When: April 12, 2008 - Saturday
3 p.m.
Where: 4 Berry Street, S.F. ILWU Local 34 Hall next to AT&T Park (there is a Giants game at 1 p.m. so it is best to take public transportation.
What: Unions speak out for health care minus the insurance industry. Support for HR 676 which guarantees healthcare for everyone. Speakers include Michael Lighty - Policy Director, California Nurses Association and Cindy Young - Senior Health Policy Advisor for the California School Employees Association. Sponsored by the California Universal Health Care Organizing Project (CUHCOP) and the California Universal Health Care Education Project
Information: 415-695-7891 info@singlepayernow.net

David Chiu
When: April 12, 2008 - Saturday
5:30 to 7:30 p.m.
Where: O'Reilly's Holy Grail Restaurant, 1233 Polk Street at Bush, San Franclsco
What: Campaign kick-off to celebrate David Chiu's campaign for Supervisor in District Three.
After the campaign launch event David will be celebrating his 38th birthday party at the same venue starting at 8:30 p.m. DJ and no-host bar. please RSVP for this event also.
RSVP by April 7, 2008 415-441-8393 or info@votedavidchiu.org

A Taste of Tamales by the Bay
When: April 13, 2008 - Sunday
Noon to 4 p.m.
Where: Fort Mason Center,
What: Fundraiser for Benchmark Institute. Tamale tasting. See how to make and serve tamales. Watch the Bay Area's hottest margarita gladiators battle to make the best margarita and enter the Grand Raffle. Listen to live Latin/Tropical jazz. Benchmark Institute teaches advocates in nonprofits how to use the law to help low-income communities. Tickets in advance $35; $40 at door. Buy your tickets on line www.tamalesbythebay.or call 415-695-9296.

District-Level Delegate elections/caucuses for Democratic National Convention
When: April 13, 2008 - Sunday
3 p.m.
Where: (see below)
What: A Caucus is being held in each of California's 53 congressional districts (by the Clinton and Obama campaigns) at which Democrats express their Presidential candidate preference and vote for Delegates to the Democratic National Convention in Denver. Caucuses are open to all Democratic voters who are registered to vote in the appropriate CD. One can register to vote at the Caucus.
You can still apply to run in these elections by going to website - deadline is April 2, 5 p.m.
According to the California Democratic Party website (www.cadem.org) under Distric Eight - Nancy Pelosi there is 1 female and 2 male for Clinton and one female and one male for Obama with one female Clinton as an alternate.

Barack Obama Delegate Election
When: April 13, 2008
Registration: 2 to 3 p.m. Caucus 3 to 4 p.m.
Where: SEIU - Nurses Headquarters, 350 Rhode Island St.
What: If you are an Obama supporter in Nancy Pelosi's congressional district, come and vote for delegate of your choice to attend the Democratic National Convention in support of Barack Obama. You must be a registered Democratic to vote.
Source: San Francisco for Democracy

*Annie Leibovitz
When: April 16, 2008 - Wednesday
6 to 9 p.m.
Where: Hotel Nikko, San Francisco
What: Join Annie Leibovitz at the fourth annual Rowell Lecture as she shows and discusses her work. The program will also include the presentation of the 2007 Rowell Award for the Art of Adventure to photographer James Balog. VIP reception $150.; Lecture $15., $25 Commonwealth club members or $35. non-members.
Information: www.rowellaward.com

Bar Association of San Francisco Forum featuring three candidates running for the San Francisco Superior Court Seat 12, in the June 3rd primary election
When: April 17, 2008 - Thursday
6 to 8 p.m.
Where: BASF Conference Center, 301 Battery Street, 3rd Floor,
What: Opening remarks from President of the Bar Association of San Francisco, James Donato - Speakers Marry Mallen, Judge Thomas Mellon, Jr. Gerardo Sandoval, Moderator Frederic White, Dean, Golden Gate University School of Law .Judicial candidates forum is open to anyone who would like to attend and is free of charge. They welcome questions to be submitted for consideration to be asked of the candidates.
Information: Barbara Fanning, bfanning@sfbar.org