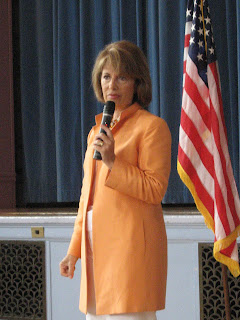 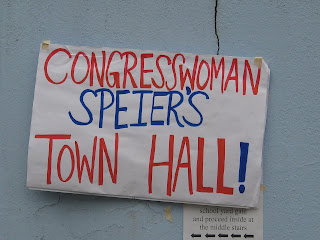 Congresswoman Speier had Town Hall meeting today in San Francisco at the Glen Park Elementary School.
It was really wonderful to see her - she is very truthful, listens carefully and will be a trustworthy elected official for us not only in Washington D.C. but in the Bay Area.
Jackie started out talking about her first piece of legislation - reducing the speed limit to 60 miles an hour (this would reduce gasoline by 45 cents a gallon).
Questions from the audience: Iran, Iraq, nuclear power, agricultural bill, education, Guantanamo Bay (she would close it) and open space.
Supervisor Bevan Dufty and Supervisor Sean Elsbernd were there along with School Board Member Jill Wynn.
Jackie Spier has opened mobile office hours in the Sunset District (field representative will meet with constituents to discuss issues concerning immigration, visas, Social Security, Internal Revenue Service, obtaining a passport and Veterans' Affair. Taraval Police Station, Community Room, 2345 24th Avenue, San Francisco, Ca. 94116.
Wednesday, 9 a.m. until 1 p.m. July 23, August 6, September 3, October 1, November 5 and December 3rd.
District Office: 400 S. El Camino Real, Suite 410, San Mateo, Ca. 94402 650-342-0300
www.speier.house.gov
Washington D.C.: 413 Rayburn House Office Building, Washington D.C . 20515 202-225-3531
Jackie Speier in the first 100 days has already taken some key issues:
No to increased war funding, yes to a new GI bill, no to warrantless wiretapping and immunity for phone companies (FISA), yes to extending unemployment benefits, yes to fixing the alternative minimum tax, yes to controlling oil speculators, no to aerial spraying for the light brown apple moth, yes to help for homeowners in foreclosures, yes to increasing access to student loans, yes to prohibiting discrimination based on genetic information, yes to funding for beach protection, yes to renewal energy tax credits, no to offshore oil drilling, yes to releasing oil from the Strategic Petroleum Reserve. No to allowing the federal government to relax California's insurance regulations, yes to passenger rail investment and improvement. Yes to better emergency care for veterans. No to corporate earmarks. Yes to overriding the President's veto of expanded medicare coverage. Yes to including transgendered people in the employment non-discrimination act.
Jackie is on the Financial Services Committee and Committee on Oversight and Government Reform Committee.
That is a lot of stuff - that doesn't include setting up new offices, new staff and flying back and forth from Washington D.C.
We are very lucky to have Jackie Speier.

Redstone Walk - Laborfest
When: July 20, 2008 Sunday
10 a.m.
Where: 16th Street at Capp
What: The Redstone Walk - Labor, Art & The Politics of The Mission District. Inside look at the Labor Temple that was headquarters of the 1934 General Strike, plus a brief tour of the historically rich working class neighborhood outside. To register call Louis Prisco at 415-841-1254 or send email to penguinflow@hotmail.com

Laborfest - Evening Boat Cruise - Guided Tour of New Bay Bridge
When: July 20, 2008 - Sunday
4:45 p.m. to 8 p.m. 5 p.m. departure
Where: Ferry Building
What: Join LaborFest and the Blue and Gold Fleet to a three-hour evening cruise on labor history and also a close-up look at the massive construction project of the eastern span of the San Francisco Bay Bridge. Joseph Blum, who is documenting the construction of this project will let you know what is being done and how they do it. Dinner will be provided.
Information: 415-642-8066 email laborfest@laborfest.net $35. space limited www.laborfest.net
Source: sf.funcheap.com

*Rally protesting another bike plan delay
When: July 21, 2008 - Monday
12:30 p.m.
Where: City Hall, Polk Street Steps, San Francisco
What: San Francisco Bicycle Coalition is holding rally to protest bike plan delay in regards to bicycle safety improvements. Meeting will be held in The Supervisors' Land Use Committee at 1 p.m. and there will be a discussion of the EIR report.
Information: Leah Shahum leah@sfbike.org 415-431-2453 ext 306

Arendt House
When: July 22, 2008 - Tuesday
6 to 7:30 p.m.
Where: 850 Broderick Street (at Golden Gate), San Francisco
What: Community Housing Partnership and Tenderloin Neighborhood Development Corporation invite you to attend a community meeting about the Arendt House development project at 850 Broderick Street. The meeting will be held to discuss the upcoming construction of Arendt House, apartments for formerly homeless senior citizens to be built at 850 Broderick Street, and to discuss management and service planning. The general contractor, Robert-Obayashi will be introduced to discuss the schedule of construction and its impacts.
Information: 415-929-2470 x 303 - Director of Housing Development

NLGLA/BALIF Lavender Law Kick Off Party
When: July 23, 2008 - Wednesday
6 to 9 p.m.
Where: Varnish Fine Art Gallery, 77 Natoma Street, San Francisco
What: National Lesbian and Gay Law Association joins up with its co-founders of Lavender Law, BALIF, to celebrate the 20th Anniversary of Lavender Law and extend a welcome to LGBT Summer Associates. Admission Free. Must be over 21. RSVP David Sims social@balif.org
Source: alicebtoklas.org

Richmond District Democratic Club - San Francisco Civil Grand Jury Report for 2007-2008
When: July 24, 2008 - Thursday
7 p.m.
Where: Richmond Police Station Community Room, 6th Avenue between Geary and Anza
What: Members of the Civil Grand Jury will attend and discuss the 2007-2008 Grand Jury Report. Question that were raised:
1. San Francisco's school admission process too cumbersome?
2. Why doesn't the Dept. of Elections have the space it needs?
3. Accountability in San Francisco Government - is anyone in charge of the store?
4. Has the San Francisco Government adequately responded to past Civil Jury reports?
5. Are there too many agencies attempting to manage the facilitation and promotion of special events?
Information: Richard Hansen 752-9412

San Francisco for Obama Group Meeting
When: July 24, 2008 - Thursday
7 p.m.
Where: Crossroads Cafe, 699 Delancey, San Francisco
What: It's high time to get together and meet to foster camaraderie and connections. Any interested members of the San Francisco for Obama Meetup group or anyone else for that matter is welcome to come.
Host: Alex Brant-Zawadzki Contact Phone: 9492302664
http://my.barackobama.com/page/event/detail/metting/4ggpr

NOPA - Mural Painting Project
When: July 26, 2008 - Saturday
10 a.m.
Where: Grove Street at Divisadero. Meet in the parking lot next to Lilly's Bar-b-queue
What: NOPA will be painting an old brick wall that constantly gets tagged in hopes to clean up that small corner of the area. They have a rock start muralist, Jonathan Burstein, doing the design. They will provide tools and refreshments.
Information: North of Panhandle Neighborhood Association leelagill@yahoo.com


HRC Human Rights Campaign Boycott
When: July 26, 2008 - Saturday
5 p.m.
Where: Outside the Westin St Francis, 335 Powell Street, San Francisco
What: Boycott of San Francisco Human Rights Campaign gala because of HRC's ongoing refusal to advocate for federal legislation that protects all Americans from discrimination based on gender identity and expression. Join SF Pride at Work for a fun, inclusive, alternative party with signs, entertainment, stickers and own awards and accolades.
Information: leftinsf.com

Supervisor Carmen Chiu - Free Day at the de Young Museum for District 4 residents
When: July 27, 2008 - Sunday
10 a.m. to 5:15 p.m.
Where: de Young Museum, Golden Gate Park, 50 Hagiwara Tea Garden Drive. Meet at Piazoni Room
What: Carmen Chiu is hosting a free museum day for District Four residents at the De Young Museum on July 27, 2008. There will be a reception on the free museum day for ticket recipients at 10:30 a.m. at the Piazoni Room near Woolsey Court.
Information: send an email to chustaff@sfgov.org. Subject line: de Young. Include in email: Your first and last name, phone number home address and number of tickets you are requesting or by phone: 415-554-7460.
carmenchu2008.com
Note: Carmen Chiu just came out with a great enewsletter for June and July 2008.

WPA Bus Tour
When: July 27, 2008 - Sunday
10 a.m. (tour lasts about five hours)
Where: Meet at the San Francisco Civic Center, between the Asian Art Museum and the Main Library
What: Join Gray Brechin and Harvey Smith as they travel through history on a bus tour of historic sites built by unionized labor. You will learn abut the major contribution workers made during the depression era of the New Deal program. They will discuss 75 years of the WPA. Co-sponsored by UTU Local 1740.
Reservations required: call 515-642-8066 or by email: laborhfest@laborfest.net and leave your name, number of reservations and phone number to get back to you. Send check to LaborFest, P.O. Box 40983, S.F. Ca. 94140 (no price shown on website information received?). Sandwiches and drinks will be available on the bus). Bus will be back at Civic Center.


Rally against John McCain
When: July 28, 2008
6 to 8 p.m.
Where: Outside Fairmont Hotel, Nob Hill, San Francisco
What: Rally against Republican candidate for President of the United States.

Eric Mar
When: July 31, 2008 - Thursday
10 a.m. to Noon
Where: Toy Boat Dessert Cafe, 401 Clement Street, S.F.
What: Come enjoy beverage/treat of choice and sit down to chat with Eric about your questions, concerns and suggestions for the Richmond District and San Francisco.
Information: ericmar.com 415505-2561

Help shape the future of Hunters Point Shipyard
When: July 31, 2008 - Thursday
5:30 to 8 p.m.
Where: Bayview Opera House, 4705 Third Street, San Francisco
What: The Office of Economic and Workforce Development and the San Francisco Redevelopment Agency are holding a community meeting to discuss the creation of an arts district at the Shipyard. The district will include permanent artists' studios and land for a community arts facility. They will share a draft vision statement and guiding principles for the arts district .
Information: Wells Lawson at the Office of Economic and Workforce Development 415-554-7613 wells.lawson@sfgov.org
Thor Kaslofasky at the San Francisco Redevelopment Agency 415-749-2464 thor.kaslofsky@sfgov.org

*San Francisco Women's Political Committee (SFWPC)
When: August 31, 2008 - Thursday
6 to 8 p.m.
Where: Medjool, 2522 Mission Street, San Francisco
What: "Summer in the City". Annual fundraiser. Celebrating the summer of love and marriage equality as well as honoring San Francisco's Women of the Year.
Individual tickets $35.
Members will get to vote on early endorsements for the November ballot on NO on Prop 4 to Keep Teens Safe and NO on Prop 8 to Protect Marriage Equality. Members must attend three events in the 12 months prior to an endorsement vote in order to qualify to vote.
Information: sfwpc@sfwpc.org 415-374-8986

Ross Mirkarimi
When: August 1, 2008 - Friday
6 to 8 p.m.
Where: The Corner (Divsadero and Oak). (I think it is a bar)
What: Group of neighbors is sponsoring a "Meet the Candidate/Birthday Party" for Ross Mirkarimi. Come out and meet Ross and learn more about programs he wants to implement in CityHall.
Source: NOPA

Carmen Chu - on her website carmenchu2008.com there is this cool map ("serving the sunset block by block") on the bottom right hand side when you go into the map and point on items by location of what Carmen Chu has done in the District.


All items subject to change. Best to check before attending

Email: mission2894@gmail.com - email with any questions or comments , or if you wish to post any calendar items.

Important - if you are having trouble with your subscription - please email me so I can contact the subscription service to fix the problem. I try and post at least twice a week .
-- --
--
--
Posted by Unknown at 1:07 PM