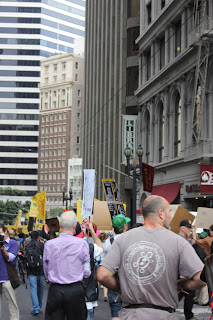 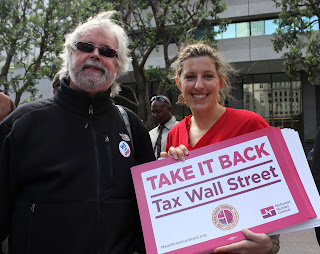 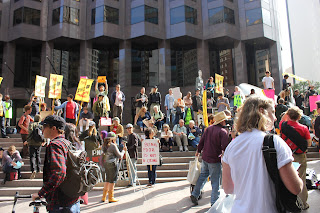 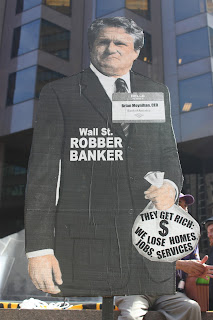 Mass Mobilization to Make Wall Street Pay - Thursday, September 29, 2001 starting out at Bank of American building on California Street.  Goal of coalition  Refund CA is to shift the debate of the economic crisis around whether the budget crisis should be solved with spending cuts or new revenue, to a debate about who should pay to solve the crisis - students and workers, or Wall Street.

BART - Redistricting
When: October 4, 2011 - Tuesday
Noon to 1:30 p.m.
Where: Valencia Gardens, Community Room, 390 Valencia Street, San Francisco
What: BART invites you to attend a public meeting to provide input and comments regarding redistricting of the BART Election Districts.
Information: boardofdirectors@bart.gov

Haight and Fillmore Fire Relief Fundraiser
When: October 4, 2011 - Tuesday
7:00 p.m. to 10:00 p.m.
Where: Peacock Lounge, 552 Haight Street, San Francisco
What: Fire Relief Fundraiser for fire victims  at Haight and Fillmore.  Music, food, beverage all donated to support the Relief Fund for their neighbors.
$10. at the door.
Food by Memphis Minnie's, Wing Wings, Chili Cha, Cha, and more.
Beer courtesy of Mad Dog in the Fog, A raffle of amazing prized  donated  by local businesses.
Three Twins, back doing what they do best - scooping ice cream.


League of Women Voters - San Francisco Mayoral Candidates Forum
When: October 5, 2011 - Wednesday
6:00 p.m. to 8:00 p.m.
Where: Robertson Auditorium, UCSF Mission Bay, 1675 Owens Street, San Francisco
What:   Mayoral Candidates Forum: The League of Women Voters, in partnership with UCSF Mission Bay will be holding a forum for candidates running for Mayor.  Cheryl Jennings of ABC-7 will  moderate the event.  Mayoral candidates will answer questions from journalists and from the audience about their plans if elected Mayor of San Francisco.
Information: lwvsf.org


Tom Nolan - Farewell Celebration
When: October 6, 2011 - Thursday
6:00 p.m. to 8:00 p.m.
Where: 730 Polk Street, San Francisco
What: Come join as Project Open Hand celebrates and honors Executive Director Tom Nolan's 17 years of service at Project Hand and wish him well as he embarks upon his next chapter.  Reminisce and enjoy tasty bites and treats from our kitchen, complimentary beverages and music.
Admission is free but space is limited.
RSVP events@openhand.org


Discover 24th Street - Something for All
When: October 7, 2011 - Friday
6:00 p.m. to 10:00 p.m.
Where: Mission  Street to Potrero Avenue, San Francisco.
What:   Discover 24th Street. Street performers, discounts, food tasting, art, music and children's activities in the heart of the Mission.
Sponsored by the Lower 24th Street Merchants and Neighbors Association in collaboration with the Office of Economic and Workforce Development, the Local Initiatives Support Corp. and the office of David Campos
Information: lower24thstreet.org


Everywhere for Avalos Day
When: October 8, 2011 - Saturday
All Day Citywide
Where: Everywhere, San Francisco
What: Create your own event for Avalos - or participate in multiple events in public spaces across San Francisco
Information: avalosformayor.com

Family Day at Herrera for Mayor
When: October 8, 2011 - Saturday
10:00 a.m. to 1:00 p.m.
Where: Dennis Herrera for Mayor 2011, 1645 California, San Francisco
What: Join the Herrera campaign for family day at headquarters.  Meet in morning for coffee and doughnuts and then head out on the campaign trail to talk to voters about Dennis Herrera.
Information: herreraformayor.com

SFPD Chief's LGBT Forum - Hate Crimes Public Information Event
When: October 13, 2011 - Thursday
7:30 p.m. to 9:30 p.m.
Where: SF LGBT Community Center, Rainbow Room, 1800 Market Street, San Francisco
What: SFPD Chief's LGBT Community Advisory Forum presents Hate Crimes Public Information Event - How they are defined, investigated, prosecuted and resources for survivors at both the Federal and State level.
Presentations:
SFPD LGBT Community Advisory Forum
Federal Bureau of Investigation
San Francisco Police Department
San Francisco District Attorney's Office
Followed by a moderated question and answer session with panelists from the above organizations.
Part of a week of events in celebration of National Coming Out Week.  In memory of Matthew Shepard, James Byrd, Jr. and all who have been a victim of a hate crime.
Free admission

South Beach/Rincon/Mission Bay Neighborhood Association - Mayoral Candidate Mixer
When: October 15, 2011 - Saturday
3:00 p.m. to 5:00 p.m.
Where: Red's Java House, Pier 30 at the foot of Bryant Street on The Embarcadero, San Francisco
What: SBRMBNA's Mayoral Candidate Mixer is hosting an opportunity for residents to have a drink with the Mayoral candidates.  All 16 qualified candidates have been invited.  Stay turned to the SBRMBNA website atwww.SBRMBNA.com to learn which candidates have agreed to attend and to casually chat about their vision for San Francisco one-on-one with SoMA waterfront residents.  Members and non-members are welcome.


Fundraiser for the Quezada family by the San Francisco Democratic Party
When: October 16, 2011 - Sunday
3:00 p.m. to 5:00 p.m.
Where: 44 Woodland Avenue, San Francisco
What: You are invited to honor Eric Quezada and to make a commitment to assisting his family in this difficult time.  His partner Lorena will be raising their daughter on her own.
Checks payable to the Eric Quezada Memorial Fund, 470 Columbus, Suite 211, San Francisco 94133