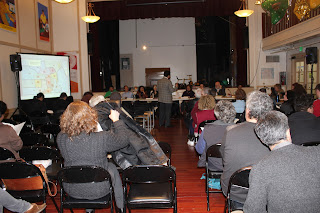 
A great place to learn about your City and meet  other people who care about San Francisco - besides it is a fascinating process - mapping by computer.


California Democratic Party Convention
When: February 10, 2012 - Friday through February 12, 2012 - Sunday
Where: San Diego Convention Center, San Diego
What: Kicking off the 2012 election cycle that will see us take back the House, protect our U.S. Senate seat and returnPresident Obama to the White House.
Information: cademconvention.org


AIDS Memorial Quilt - Castro Street
When: February 12, 2012 - Sunday
Noon to 8:00 p.m.
Where: Old Tower Records site on Market Street, San Francisco
What: 40 panels of the AIDS Memorial quilt will be on display at the old Tower Records site on Market Street. These panels have not been shown in San Francisco since 1999.  Thanks to Petyr Kane of Citizen and Body and Beth Feingold of Under One Roof for making the project happen.
Source: Facebook - Cliff's Variety