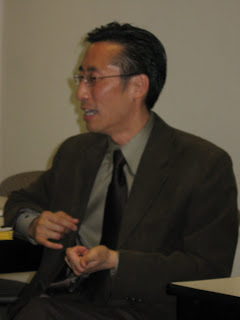 Supervisor Mar took a moment to talk about himself personally, so people would get to know him as a real person - not the person that was sometimes demonized during the campaign.

Besides being a lawyer, teacher at San Francisco State and being on the San Francisco School Board, Eric has been involved in immigrant rights, non-profits, environmental justice along with the living wage movement for the last 28 years.

Supervisor Mar is on the Government Audit Oversight Committee and the Land Use & Economic Development Committee of the Board of Supervisors. He wants to help small businesses in his District and wants to improve Muni and help families . He has concerns about the budget and wants to make responsible cuts.

Rally to Save Public Access TV
When: February 23, 2009 - Monday
9:30 a.m.
Where: City Hall Steps
What: Press conference and rally in support of public access prior to 10 a.m. hearing before the Board of Supervisors' City Operations and Neighborhood Services Committee.
Information: D. Boyer dinaboyer2@gmail.com

SF Pride at Work - Rally and March - San Francisco Hotel Workers Rising
When: February 24, 2009 - Tuesday
4 to 6 p.m.
Where: Justin Herman Plaza, 1 Market Street, San Francisco
What: Through a fair majority sign-up process, workers at the Intercontinental, W, Four Seasons, Omni, St. Regis, Vitale, Courtyard by Marriott Second Street and other hotels joined the union without the threats and intimidation of a anti-union campaign.
The Hyatt Fisherman's Wharf and Le Meridien hotels sill refuse to respect their workers' right to decide whether to organize. Join in a rally to call on these two hotels to give equal rights to their workers.
Information: robert.haaland@gmail.com

*Excelsior District Improvement Association - Assessor Phil Ting
When: February 24, 2009 - Tuesday
7 p.m.
Where: 45 Santa Rosa Avenue, between Mission and Alemany (in the basement) San Francisco
What: Monthly meeting. Assessor Phil Ting will be speaking about foreclosures and focusing on the Excelsior area.
Information: excelsiorsf.org

Excelsior Branch Library - Woody Guthrie and the Great American Folksong
When: February 25, 2009 - Wednesday
7 p.m.
Where: Excelsior Branch Library, 4400 Mission Street, San Francisco
What: Tim Holt will present a brief history of the American folksong, the the old-time ballads of Appalachia to the Depression era songs of Woody Gutrie. Tim Holt will sing a variety of American folksongs.
This program was made by a generous gift by Dolorous Knight to Friends of the San Francisco public library.

Community Building Town Hall Meeting - A forum on the No on 8 Campaign
When: February 26, 2009 - Thursday
6 to 9 p.m.
Where: Bill Graham Civic Auditorium, 90 Grove Street, San Francisco
What: Open discussion on the strengths and weaknesses of the No on 8 campaign.
Members of the No on 8 Executive Committee, campaign consultants and staff will speak and respond to questions. This meeting takes place exactly a week before the California Supreme Court hearing on the case to overturn Prop. 8.

*Implementation Process for Proposition 11
When: February 27, 2009 - Friday
10 a.m. to 4 p.m.
Where: Office of the Courts, Milton Marks Auditorium, 455 Golden Gate Ave., San Francisco
What: Redistricting The State Auditor's Office will be holding public meetings across the state to solicit input on how to make the recruitment and selection process for the citizens' redistricting commission as open and broad as possible.
Source: League of Women Voters of San Francisco lwvsf.org

*BrasilCuba-SF Carnaval Contingent Benefit Dance Party
When: February 27, 2009 - Friday
6 to 10 p.m.
Where: Bollyhood Cafe, 3372 19th Street, between Mission and Capp Street, San Francisco
What: Rhythm and Motion/ODC in cooperation with Mission Boys and Girls Club invite you to a Benefit Dancy Party for BrasilCuba-SF Carnaval Contingent. Presenting "Las Amazonas- The Breath of the World" - Tania Santiago - Artistic Director in collaboration with Yismari Ramos Tellez and Consulting Choreographer Ramon Ramos Alavo. Dance to "Futuro Picante" - the hot and amazing Latin youth band from the heart of the Mission. FP-Timbale Player. Contribute to Culture and Community in your neighborhood. Live music, dancing, food and conversation - family friendly. This is a recession-fighting, stimulus-building party. No one turned away at the door. Sliding scale.
Information: annie@odcdance.org

Items change - please check before attending event for any changes.