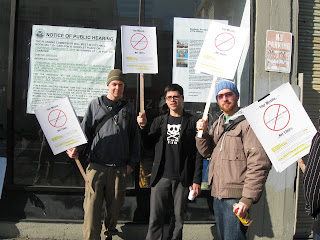 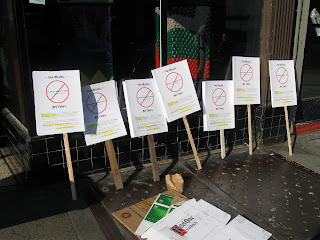 Saturday morning I had to send my rent check out by 10 a.m. so I decided to go to the Anti American Apparel Store rally being held by Pirate Cat Radio 87.9 against the proposed store at 988 Valencia Street.

First of all, 10 a.m. on a Saturday is too early - especially for this street - everyone was on their way to Boogaloos for breakfast. There were a few people there. American Apparel is trying to open a store at 988 Valencia Street next door to Artists Television Access. Stop American Apparel wants to keep Valencia locally owned and leave the box stores in Union Square. There motto "Your Mission - Not Theirs".

First of all, this is a very tiny store. It's between the 24th and 16th Street Bart Street stations which might help get people to go down the whole street and look at all the other stores. On the other hand I just looked at the American Apparel website americanapparel.net - they are huge!!!

Stop American Apparel website: stopamericanapparel.wordpress.com. I understand that Supervisor Bevan Dufty has come out against this project.

There will be Planning Commission meeting this Thursday, February 5th at 1:30 p.m. Room 400, City Hall, San Francisco if you wish to hear more details.

Valencia Street, like other neighborhoods is hurting financially - and some new stores could help - however, there is a balance that is needed in this neighborhood - (like that awful big cell phone store next to Good Vibrations!).

One Mission District, One Voice: San Francisco City budget Impacts & Solutions
When: February 2, 2009 - Monday
1 to 5 p.m.
Where: Bahai Center, 170 Valencia Street, San Francisco
What: Planning meeting intends to provide space for the Mission District community to develop a unified strategy and voice in response to the impacts of tough economic times for our city, state and nation. Mission District CBO's and interested stakeholders encouraged to attend.
RSVP and Questions: emily@micocosf.org

San Francisco Educators and Parents - Demonstrate!
When: February 3, 2009 - Tuesday
4 p.m.
Where: City Hall, San Francisco
What: Stop the race to the Bottom! Calling on all educators and parents to take a stand for our schools, which face $10.8 billion in cuts. Sacramento needs to hear from SF that all education cuts are unacceptable. School Petition Drive ongoing.
Information: www.uesf.org
Source: Rachel Norton - thanks!

Rally for Condo Conversion Reform
When: February 4, 2009 - Wednesday
8:15 a.m.
Where: City Hall Steps, San Francisco
What: Join Plan C (and other groups) for a rally to support condominium conversion reform. The City will hold its annual condo conversion lottery. The rally is to highlight the dissatisfaction with outdated process that unfairly penalizes first time homeowners. There will be petitions to handout to reform the lottery process. Will then walk to Room 400 where the lottery is being held.
Information: Plan C: www.plancsf.org

*Celebrate the 36th Anniversary of Roe vs. Wade
When: February 4, 2009 - Wednesday
5:30 to 7 p.m.
Where: The Latino/Hispanic Community Room A, The San Francisco Main Library, 100 Larkin Street at Grove, San Francisco
What: NARAL Pro-Choice California is pleased to present "A Choice Conversation with Rose Aguilar". She will discuss her new book "Red Highways: A Liberal's Journey into the Heartland".
NARAL Pro-Choice California State Director Amy Everitt will provide an update on the threats to reproductive rights throughout the country and what we can do to ensure that all women have access to the freedom and privacy promised under Roe. Light refreshments will be provided. Event is free of charge.
RSVP: Lindsay Criswell LCriswell@ProChoiceAmerica.org
Information: www.prochoicecalifornia.org/action/events

2009-10 Budget Workshops - San Francisco Recreation and Park Department
When: February 4, 2009 - Wednesday
6 to 8 p.m.
Where: Sunset Recreation Center, 2201 Lawton Street at 28th Avenue, San Francisco
What: Help set priorities and develop strategies to generate more funds for San Francisco parks and recreation programs. You will learn about the Department's budget and the fiscal challenges we face and engage in a conversation about how to address them.
Information: www.parks.sfgov.org

*Zen Center Quarterly open meeting
When: February 4, 2009 - Wednesday
7:30 to 9 p.m.
Where: City Center, 300 Page Street, San Francisco
What: Discussion to talk about the Zen Center's vision to Widen the Circle of our Dharma Activities and offerings. They will describe the plans, programs and initiatives they have been developing over the past several years.
Information: ccoffice@sfzc.org news.sfzc.org

Appointments Training Workshop for Women
When: February 5, 2009 - Thursday
5:30 to 7:30 p.m.
Where: UCSF Health Sciences West 302, San Francisco
What: California Women Lead, the UCSF Center for Gender Equity and UCSF Community and Governmental Relations invite you to a workshop to learn how to apply for and get appointed to boards and commissions. This free workshop will guide you through the appointments process:
Speakers:

*Bell Market Employee Farewell
When: February 7, 2009 - Saturday
11 a.m.
Where: Park adjacent to Noe Valley Farmer's Market, San Francisco
What: Ceremony to honor Bell Market employees. Join the Board of the Noe Valley Farmer's Market and other long-time shoppers and neighbors in honoring the service provided by the workers of Bell Market which will permanently close on February 15, 2009. (will be replaced by Whole Foods).
Information: noevalleysf.blogspot.com

SPUR - The future of San Francisco's Waterfront Open Space
When: February 10, 2009 - Tuesday
12:30 p.m.
Where: 312 Sutter Street, Fifth Floor, San Francisco
What: From Crissy Field on the north to being-planned Seawall Lot 337 south of the ballpark to Bayfront Park at Mission Bay to a proposed park at Hunter's Point designed for ArcEcology and the California Coastal Commission, Hargreaves Associates landscape architects are helping determine how San Francisco meets its edge. Join Senior principal Mary Margaret Jones as she discusses how each are different, who they serve, and what they are intended to make in totality. $5. non - members
Information: www.spur.org

New website update: Mayor's Office Public Safety Blog - has links to all the San Francisco Police Stations - that is great - sfpublicsafety.blogspot.com - "Stay Safe and informed in San Francisco". This is a blog that would be smart to bookmark for future reference.

Items change - please check before attending event for any changes.