Swearing in of Board of Supervisors - Drama 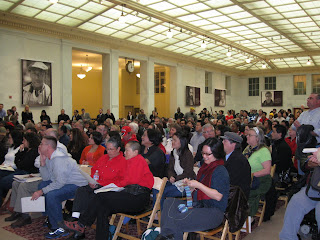 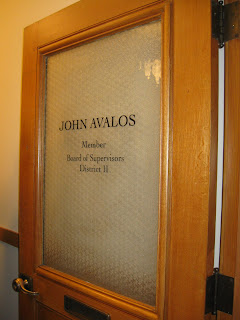 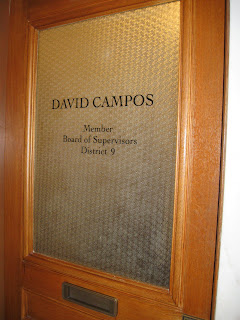 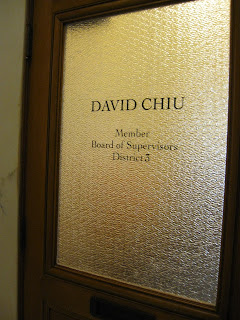 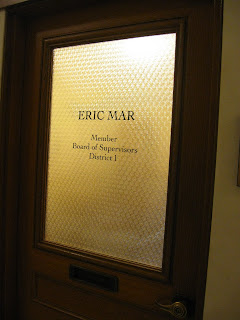 I attended the swearing in for San Francisco Board of Supervisors yesterday. It was like being in a tv soap opera and the people change mid-stream. Lots of new faces and energy roaming the halls.

As expected there was no room in the chambers so I watched from the peanut gallery (North Light Court) - actually this was a lot of fun. Lots of excitement, whooping it up for their favorite Supervisor. And then the vote for President of the Board started - it was amazing drama - I couldn't figure out by the vote count what was going - (strange stuff - I would have loved to have had "bubbles over every body's head showing what they were really thinking") . Too complicated for me. Bottom line - the progressives stuck together. It was good tv.

Who can participate:
a. A Democrat residing in and registered to vote in the Assembly District by October 20, 2008 deadline, unless the Democrat turned 18 or was naturalized after deadline.
b. $5. fee to defray costs of the ADEM .
Voters are not required to stay for the entire election meeting. Complete the sign in sheet by closing of registration.
Voting is done by secret ballot.

Information: At the convention in April there will be election of the State Chair of the California Democratic Party currently held by Art Torres for the last 11 years.

The following candidates are running for State Chair:

Duboce Triangle Neighborhood Association Public Meeting
When: January 12, 2009- Monday
7:30 p.m.
Where: CPMC Davies Campus, Lower Level B Auditorium, San Francisco
What: Monthly meeting. This organization has a informative newsletter which you can find on their website. Agenda:
Information: www.dtna.org

How About Them Giants!
When: January 12, 2009 - Monday
8 p.m.
Where: San Francisco Jewish Community Center, 3200 California Street, S.F.
What: Listen to Gary Radnich of KRON and KNBR Radio along with San Francisco Giants President Larry Baer in a freewheeling conversation. $18 public.
Information: tickets.jccsf.org

SPUR - A one-year update from Planning Director, John Rahaim
When: January 13, 2009 - Tuesday
12:30
Where: SPUR, 312 Sutter Street, 5th Floor San Francisco
What: John Rahaim will talk about the successful adoption of the Market Octavia Better Neighborhoods Plan and will give a preview of the Department's priorities for the coming year.
Information: www.spur.org

*San Francisco Board of Supervisors Meeting
When: January 13, 2009 - Tuesday
2 p.m.
Where: City Hall San Francisco
What: First meeting with Class of 2008. Agenda is short - nothing out of the ordinary .
Information: www.sfgov.org/site/bdsupvrs

FixMasonic 2009 - Bike Plan
When: January 13, 2009 - Tuesday
6:30 p.m.
Where: San Francisco Day School, Golden Gate Avenue (entrance on Golden Gate) S.F.
What: Meeting on final draft EIR on SF Bike Plan. Discussion on the plan and how its two alternative designs for the street mesh with what FixMasonic asked for in the petition signed by over 600 neighbors.
Information: http:www.sfmta.com/cms/bproj/bikeplan.htm
fixmasonic.org

Brown Bag Lunch: Transforming SF into World-Class Bike-Riding City
When: January 14, 2009 - Wednesday
Noon to 1 p.m.
Where: Department of the Environment, 11 Grove Street, San Francisco
What: Envision a city-wide bicycle network that welcomes people of all ages and backgrounds on the most sustainable, health, and cost- efficient form of transportation. Speaker: Leah Shahum, Executive Director of the San Francisco Bicycle Coalition.
Information: www.sfnpc.org

Commonwealth Club - Ron Suskind
When: January 14, 2009 Wednesday
5:30 p.m.
Where: 595 Market Street, 2nd Floor, San Francisco
What: "A New Era, The New President, and the World". Pulitzer winner Ron Suskind reveals what kind of world President-Elect Obama is inheriting and how he can re-direct the country toward success. $18 non-members
Information: commonwealthclub.org

Hearing the City - Evolution of Radio
When: January 14, 2009 - Wednesday
7:30 p.m.
Where:Counterpulse, 1310 Mission at 9th Street, San Francisco
What: From AM radio before World War II through podcasting, radio will be traced. Free.
Information: counterpulse.org

GLBT Historical Society - Polk Street In Transition
When: January 15, 2009 - Thursday
5:30 to 8:30 p.m.
Where: 657 Mission Street, Suite #300, San Francisco
What: New exhibit "Polk Street in Transition" Opening reception which will include a talk by Susan Stryker. Exhibit focuses on the history of the Polk, from the 1980's to the present.
Information: www.glbthistory.org

Clean and Fair Elections SF Meeting
When: January 17, 2009 - Saturday
10 a.m. to 11:30
Where: 592 Pennsylvania, S.F.
What: Full public financing of campaigns is the way to wrest control of government from big-money donors and restore it to the people. BarackObama is a co-sponsor of the Fair Elections Now Act in the Senate
Information: www.cleanandfairsf.org

*End Bush
When: January 20, 2009 - Tuesday
9 a.m.
Where: Bush Street and Presidio Avenue, San Francisco
What: On January 20, 2009 at noon Eastern time, 9 a.m. Pacific Time George W. Bush will no longer be President of the United States. Meet at Bush and Presidio by the "End Bush" street sign to celebrate.

Presidential Inauguration Simulcast
When: January 20, 2009 - Tuesday
Entry starts at 6 a.m.
Noon
Where: SF Civic Center Plaza, across from City Hall, San Francisco
What: NextArts is funding a huge screen and broadcast of the inauguration ceremony. NextArts asks that you bring new socks or underwear as a charitable donation (items must be new (tag still attached)
Information: mail@nextarts.org


Please email any items for the calendar to: mission2894@gmail.com

Events change. Best to check before before hand for any changes. --

Labels: San Francisco Board of Supervisors