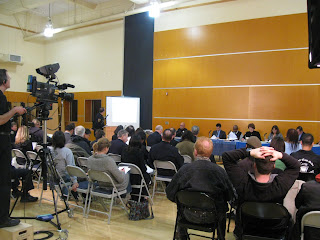 Captain Jimenez' presentation was well organized and short as he went over the 44 page report.
There are over 19,000 residents in the Tenderloin (highest density in the City) including 3,500 children and 6,000 seniors. This district has the highest concentration of parolees with the additional activity of people getting off at two Bart stops from out of town.

There seems to be a very good relationship between the residents and the police who walk the beat. That is why last year homicides in this district were down to four - and all four homicides were solved with help from the community.

Tenderloin Station Goals:
The Police Commissioners had praise for Captain Jimenez and his operation.
Rightfully so - this seems to be a well run police station. We should be thankful.

I encourage everyone to go to www.sfgov.org/site/police and review the community forum calendar for when your Police district is having their monthly meeting. There is also a police captain email list for you to find your district and ask for District updates. The updates consist of district events and police blotters. Sometimes this report can be scary, but you also learn a lot about your district and what to lookout for.

Supervisor Eric Mar: Still has his website up with up-to-date information: www.ericmar.com

Supervisor David Chiu - Still has his website up with up-to-date information: votedavidchiu.org

Stop on War on Women
When: January 24, 2009 - Saturday
10:30 a.m.
Where: Music Concourse, at the end of the Embarcadero at Market Street, San Francisco
What: Join the Bay Area Coalition for Our Reproductive Rights (BACORR) to counter the right wing "Walk for Life". Free abortion on demand.
Information: www.bacorr.org bacorrinfo@yahoo.com

San Francisco Chamber of Commerce - Congestion Pricing
When: January 27, 2009 - Tuesday
Noon to 1 p.m.
Where: 235 Montgomery, 12th Floor, San Francisco
What: Have lunch with the Transportation Authority to get an update on the feasibility study of congestion pricing in San Francisco. RSVP paleman@sfchamber.com
Information: sfchamber.com

SPUR - A Constitution convention in California
When: January 27, 2009 - Tuesday
12:30
Where: SPUR, 312 Sutter, Fifth Floor, San Francisco
What: The Bay Area Council has called for the State of California to begin a process to consider changes to our system. Hear Bay Area Council President Jim Wunderman and Vice President for Communications John Grubb as they explain the idea of the Constitutional Convention and what they are doing to make it happen. $5. non-members
Information: www.spur.org

India Basin Community Annual Meeting
When: January 29, 2009 - Thursday
6 to 8 p.m.
Where: Pump It Up of San Francisco, the Inflatable Party Zone, 201 Mendell @ Newhall (one block north of Evans, San Francisco
What: Annual general meeting. Get information on IBNA's vision, past accomplishments, future community projects, events and participation in redevelopment and City Government planning for the area.
Information: www.indiabasin.org

Writers Remembered 2009 - A Bay Area Literary Tribute
When: January 31, 2009 - Saturday
1 to 4 p.m.
Where: Koret Auditorium, Main Library, San Francisco
What: Join us as the local literary community gathers to honor the creative minds that passed away in 2008. Many Bay Area personalities will be honoring such writers as :
Hosted by writer Gerry Nicosia.
Information: www.friendsfpl.org

Please email any items or comments to: mission2894@gmail.com