Budget cuts - " We take it personally" 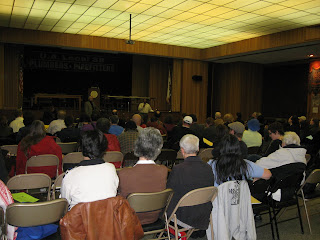 I attended the Labor-Community Speak out on the California Budget Crisis held at the Plumbers Hall on Market Street last night. This meeting was held after a short San Francisco Labor Council Meeting. Huge crowd.

There was a welcome by Executive Director Tim Paulson and City College Trustee Chris Jackson. Bob Twomey, District Director for Assembly District 12 (Fiona Ma) gave an overview of the California Fiscal Crisis. Very depressing. Bob Twomey reiterated that people have to work this week to help get legislature to pass a budget.

There were speakers from K-12 education, Community College, CSU, City and County of San Francisco, non profits and the State of California all discussing what could happen. This is all disheartening especially in regards to health service and our school system.

As someone said, San Franciscans need to understand how these cuts will effect them. Another person who said his fellow worker was just laid off - said "we take it personally".

This morning I received an email from Assemblyman Tom Ammiano giving us an update, I emailed him back telling him that he was mentioned last night because of his "rainy day session" funding which saved the San Francisco school last year - I told him I was so depressed by all the bad news - he wrote back this morning "Don't be depressed. There is a lot we can do if we keep working."

So don't give up!

Went down to the Department of Elections and picked up the following names that were officially listed as running for office in 2010:

Results for the delegates for the 12th AD (Fiona Ma) to the California Democratic Party convention being held in Sacramento in April :


San Francisco Chamber of Commerce - Congestion Pricing
When: January 27, 2009 - Tuesday
Noon to 1 p.m.
Where: 235 Montgomery, 12th Floor, San Francisco
What: Have lunch with the Transportation Authority to get an update on the feasibility study of congestion pricing in San Francisco. RSVP paleman@sfchamber.com
Information: sfchamber.com

SPUR - A Constitution convention in California
When: January 27, 2009 - Tuesday
12:30
Where: SPUR, 312 Sutter, Fifth Floor, San Francisco
What: The Bay Area Council has called for the State of California to begin a process to consider changes to our system. Hear Bay Area Council President Jim Wunderman and Vice President for Communications John Grubb as they explain the idea of the Constitutional Convention and what they are doing to make it happen. $5. non-members
Information: www.spur.org

Board of Supervisors Meeting
When: January 27, 2009 - Tuesday
2 p.m.
Where: City Hall, Room 260, San Francisco
What: Items off agenda:
Information: www.sfgov.org/site/bdsupvrs

Board of Education Meeting
When: January 27, 2009 - Tuesday
6 p.m.
Where: Irving G. Breyer Board Meeting Room, 555 Franklin Street, First Floor, San Francisco
What: Regular Meeting
Mission Statement of the SFUSD: The mission of the San Francisco Unified School District is to provide each student with an equal opportunity to succeed by promoting intellectual growth, creativity, self-discipline, cultural and linguistic sensitivity, democratic responsibility, economic competence, and physical and mental health so that each student can achieve his or her maximum potential
Board of Education members:
Information: sfusd.edu

Citizen Hope Mixer with Local Elected officials
When: January 28, 2009 - Wednesday
6 p.m.
Where: Mercury Lounge, 1582 Folson Street, San Francisco
What: As President Barack Obama assumes office, we hope to build on the renewed spirit of cooperation and community building from the ground up. Citizen Hope is hosting a mixer with local elected officials in San Francisco. Our elected leaders will need to hear from you so that we can create the change we need in San Francisco. Confirmed guests include:
Information: citizenhope.org

Lake Merced Natural Area - a Nature in the City Co-Production
When: January 28, 2009 - Wednesday
7:30
Where: Counterpulse, 1310 Mission at 9th Street, San Francisco
What: The largest coastal lagoon between Point Reyes and Pescadero, Lake Merced is an incomparable natural resource for San Francisco. A controversial preserve has been proposed for East Lake and some intact habitats, to protect wildlife and threatened species. There will be a panel discussion. Free.
Information: http://foundSF.org

India Basin Community Annual Meeting
When: January 29, 2009 - Thursday
6 to 8 p.m.
Where: Pump It Up of San Francisco, the Inflatable Party Zone, 201 Mendell @ Newhall (one block north of Evans, San Francisco
What: Annual general meeting. Get information on IBNA's vision, past accomplishments, future community projects, events and participation in redevelopment and City Government planning for the area.
Information: www.indiabasin.org

2009-10 Budget Workshops - San Francisco Recreation and Park Department
When: January 29, 2009 - Thursday
7 to 8:30 p.m.
Where: Joseph Lee Recreation Center, 1395 Mendell Street at Oakdale) San Francisco
What: Help set priorities and develop strategies to generate more funds for San Francisco parks and recreation programs. You will learn about the Department's budget and the fiscal challenges we face and engage in a conversation about how to address them.
Information: www.parks.sfgov.org

Writers Remembered 2009 - A Bay Area Literary Tribute
When: January 31, 2009 - Saturday
1 to 4 p.m.
Where: Koret Auditorium, Main Library, San Francisco
What: Join us as the local literary community gathers to honor the creative minds that passed away in 2008. Many Bay Area personalities will be honoring such writers as :
Hosted by writer Gerry Nicosia.
Information: www.friendsfpl.org

*What President Obama needs to know about healthcare reform.
When: January 31, 2009 - Saturday
3 p.m.
Where: Centro del Pueblo at 16th Street, San Francisco
What: Why HR 676, the US National Health Insurance Act can solve our healthcare crisis. We will answer 35 questions in 35 minutes on the contents of HR 676. Speakers:
Sponsored by Single Payer Now and the California Universal Health Care Education Project.
Information: www.SinglePayerNow.net dbechler@value.net

One Mission District, One Voice: San Francisco City budget Impacts & Solutions
When: February 2, 2009 - Monday
1 to 5 p.m.
Where: Bahai Center, 170 Valencia Street, San Francisco
What: Planning meeting intends to provide space for the Mission District community to develop a unified strategy and voice in response to the impacts of tough economic times for our city, state and nation. Mission District CBO's and interested stakeholders encouraged to attend.
RSVP and Questions: emily@micocosf.org

2009-10 Budget Workshops - San Francisco Recreation and Park Department
When: February 4, 2009 - Wednesday
6 to 8 p.m.
Where: Sunset Recreation Center, 2201 Lawton Street at 28th Avenue, San Francisco
What: Help set priorities and develop strategies to generate more funds for San Francisco parks and recreation programs. You will learn about the Department's budget and the fiscal challenges we face and engage in a conversation about how to address them.
Information: www.parks.sfgov.org

*Appointments Training Workshop for Women
When: February 5, 2009 - Tuesday
5:30 to 7:30 p.m.
Where: UCSF Health Sciences West 302, San Francisco
What: California Women Lead, the UCSF Center for Gender Equity and UCSF Community and Governmental Relations invite you to a workshop to learn how to apply for and get appointed to boards and commissions. This free workshop will guide you through the appointments process:
Speakers: