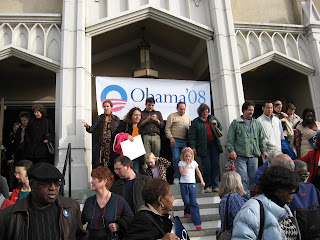 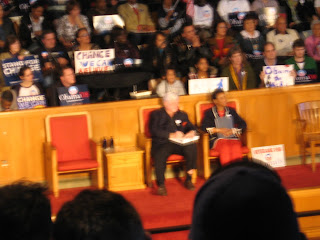 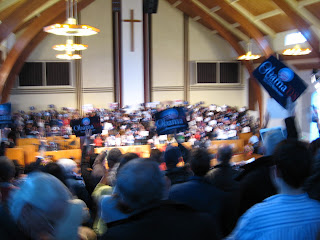 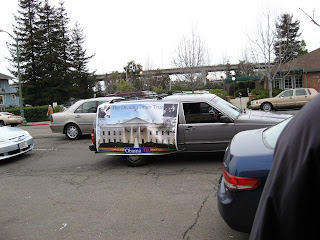 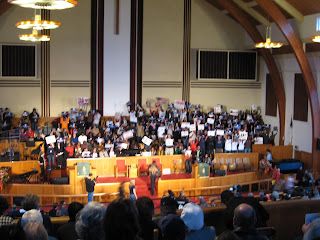 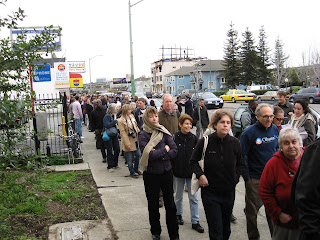 Senator Kennedy is such an icon, he brings back such wonderful and sad memories. What a wonderful moment to see so many people (including the Senator) being enthused and hopeful again. The way the Beebe Memorial Cathedral church in Oakland was set up it was almost like being at a high school basketball game with both sides chanting at each other (even doing the dreaded "wave"!).

It was very cold waiting to get in, but it was fun to wave at all the honking cars going by. One car went by with the driver (male) showing his thumb up with the woman showing her thumb down!

The beloved Congresswoman Barbara Lee spoke first. She spoke about "marching to the future and participating in history. " This church was the same church Congresswoman Shirley Chisholm had spoked from when she ran for President back in the 1970's. Barbara Lee said that Obama was in agreement with the Bay Area in regards to getting out of Iraq, obtaining health care, ending proverty, solving the housing crisis and moving forward with civil rights. That the Obama campaign was a movement, bringing people into a young century with a positive direction inspiring to activism with active commitment.

Senator Kennedy stood up to cheers of "Kennedy, Kennedy"- such a bone chilling sad moment bringing up past memories. What a strong voice, funny, inspiring, an old pol passing on the glories to a new generation. He talked about the Kennedy's being in the Bay Area since 1959, about how Kennedy walked with Martin Luther King and now Kennedy was walking with Barack Obama. Obama was challenging America to work together for a new day.

This election will change our lives.


Celebrate the 2nd Victory Against Starbucks 8 p.m. Bitter end on Clement Street between 5th and 6th Avenue (south side).

SPUR- Transportation Committe - Join SFMTA Chief Financial Officer Sonali Bose and fellow SPUR members for a discussion of the SFMTA's 2008-2009 budget. Learn how the increases from Proposition A (Nov 2007) and cutbacks at the state level balance out and challenge us to balance the books without service cuts or fare increases. Information: dsnyder@spur.org

Rally for Condo Conversion Reform Meet on steps of City Hall at 8:15 a.m. Lottery at 9 a.m.

Spur - Post Election Recap for SPUR - 12:30 to 1:30 312 Sutter Street, Fifth Floor $5 for non members Bring your lunch. Jim Stearns with pollster and analyst David Latterman for a review of who voted, who didn't and what it means. Information: 415-781-8726 info@spur.org