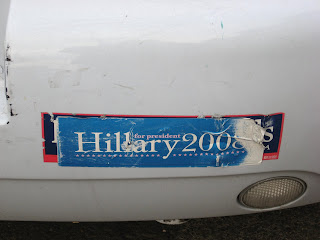 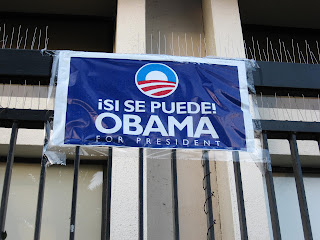 Hillary Clinton - 9 a.m. to 9 p.m. San Francisco Headquarters, 1122 Howard Street, S.F. - It's Super Bowl Sunday and we are rooting for Team Hillary. Meet with friends, grab some muchies and make calls for Hillary! We will have chips and dip and the game on our TV - but that won't stop us from reaching out to voters in the last 48 hours before the polls open! (this is from Hillary website - although yesterday I read somewhere that a Clinton spokesperson said they were not calling because the Super Bowl was a national holiday? - who knows?).
I remember when I was a teenager knocking on doors to talk about a candidate during the World Series - talking through the screen door .... (it's not the best time to gain new supporters).

Barack Obama - Yield Wine Bar - 6:30 to 9 p.m. 2490 3rd Street @ 22nd - Dogpatch in Potrero Hill. A "Learn-More" event for undecided and independent voters. Enjoy some complimentary "green" wines provided by Yield and delicious appetizers provided by Hands on Gourmet. This will be an informal chance to ask questions, learn more about specific policy platform and get to know the concerns/interest of friends and neighbors. Policy-minded folks from the campaign will be available to speak to Obama's vision for education, Iraq, the economy and health care. We want to invite as many undecided voters as we can and want to make this a fun, and safe space to talk about the issues and the vision of Senator Obama. Information: getatasteoobama08@gmail.com (source: Obama website)

SPUR- Transportation Committe - Join SFMTA Chief Financial Officer Sonali Bose and fellow SPUR members for a discussion of the SFMTA's 2008-2009 budget. Learn how the increases from Proposition A (Nov 2007) and cutbacks at the state level balance out and challenge us to balance the books without service cuts or fare increases. Information: dsnyder@spur.org

Deadheads for Obama - featuring Bob Weir, Mickey Hart, Phil Lesh and Friends, The Warfield, San Francisco 7:30 p.m. $35. Doors open at 6 p.m. This will be the first time since 2004 that this group has performed together. (I believe performance was sold out in 20 minutes). iclips will provide a live simulcast streamed via the internet at about 7:30 p.m.

Board of Supervisors - 2 p.m. City Hall, San Francisco -Interesting Items:
Charter Amendment: Even-Numbered Years - Change election cycle for the offices of Mayor, Sheriff, District Attorney, City Attorney and Treasurer so that these offices will be elected in even-numbered years; and to amend the definition of general municipal election so that such elections occur only in even-numbered years.
Charter Amendment: To provide for the election of members of the Municipal Transportation Agency's Board of Directors, setting their compensation, and fixing their status as members of the Parking Authority Commission.
Charter Amendment: Require confirmation by the Board of Supervisors of the Mayor's appointments to the PUC Commission and to set qualifications for members of the PUC.
Resolution: Urging Mayor Gavin Newsom to return to the Municipal Transportation Agency positions and funds that are not directly relatead to the operations of the agency.
(doesn't look like the Board of Supervisors and the Mayor are getting along...) source: Board of Supervisors Agenda

Rally for Condo Conversion Reform Meet on steps of City Hall at 8:15 a.m. Lottery at 9 a.m.

Spur - Post Election Recap for SPUR - 12:30 to 1:30 312 Sutter Street, Fifth Floor $5 for non members Bring your lunch. Jim Stearns with pollster and analyst David Latterman for a review of who voted, who didn't and what it means. Information: 415-781-8726 info@spur.org

"Love on Wheels" The San Francisco Bicycle Coalition's Love on Wheels. Come see the original 70's style dating game for cyclists. Rickshaw Stop, 155 Fell Street (between Van Ness and Franklin. Doors open at 6 p.m. Game at 7 p.m. free for SFBC Members Non members $10. Free valet bike parking. Lovelorn lovebirds each quiz three possible dates (hidden from their view) and choose one to ride off with, on a date provided by one of the Bicycle Coalition. All volunteers get a free movie ticket from the Balboa Theater. . Information: love@sfbike.org

Tango the Night Away at the Ferry Building - Ferry Building Milonga, an Argentine tango dance party to be held at the Ferry Building, Market Street at the Embarcadero from 5:30 to 8p.m. 100 dancers in the main hall to re-create the atmosphere of the grand dance halls that exist to this day in Buenos Aires. Information: 45-990-8135 Terence Larke teryclarke@hotmail.com

TNT - Post Office Patrons Hearing - Efforts to get the United States Postal Service to turn 101 Hyde Street (at Golden Gate) into a full service facility. Hearing at City Hall in Room 253 on Thursday February 14th at 1 p.m. This would improve the neighborhood. You can sign a letter asking the U.S. Postal Service to restore basic service to this location, in addition, add full staffing to the location to help ensure the safety of all postal patrons and neighbors. http://www.petitiononlilne.com/101Hyde/Petition.html Information: Safety Network Partnership, Dina Hilliard Phone 415-538-8100 ext #204
--