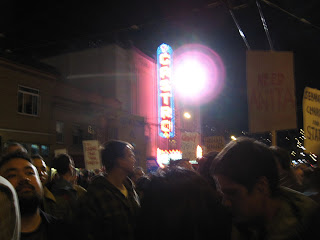 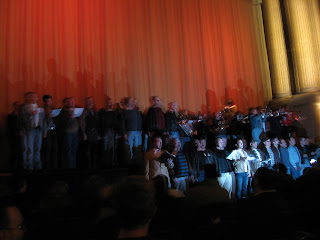 Milk production showed the Academy Award film "The Times of Harvey Milk" at the Castro Theatre before beginning the shoot . Tom Ammiano, Anne Kronenberg and Tory Hartman who were in the film were all introduced.

I don't know why, even though I saw this film once before, I just sat there and cried my eyes out (even more so than the night of the shootings). Maybe because I saw so many people I knew in the film that have passed away.Jim Rivaldo, Dick Pabich, Bill Kraus, Jim Elliot, Scott Smith, Dick Hongisto, Gordon Lau, Randy Shilts - all gone - so sad.

The restaurants in the neighborhood pitched in with great food before we went out in the cold.

They closed down Castro Street and 17th Street and we were part of the crowd while Sean Penn spoke as Harvey. So strange to do this!

I borrowed someone's jean jacket and I went through 35 years of campaign buttons but could not find a original Harvey Milk button and there were no George Moscone buttons made, but I did find a Rick Stoke's button (ran against Harvey Milk), Carol Ruth Silver button who ran for Supervisor at the same time as Harvey plus a Shirley Chishom for President button and Ted Kennedy for President/1980 button . I also found the hotel room key from the PSA Hotel (across from City Hall) where George Moscone had his victory party on election night. A whole bunch of us got together and rented a room so we could have a private party.

They warned us that the filming would take time, and it did, and we redid the filming more than once in different ways. There were camera people on the rooftops and old time cars and every one did their best to dress from the seventies. ( except people had there cell phones and digital cameras - and I smelt marajuana and it was okay to smoke cigarettes!)

Friday night they will be filming the march from the night of the killings. People will need to bring their own candles.

Board of Supervisors - 2 p.m. City Hall, San Francisco -Interesting Items:
Charter Amendment: Even-Numbered Years - Change election cycle for the offices of Mayor, Sheriff, District Attorney, City Attorney and Treasurer so that these offices will be elected in even-numbered years; and to amend the definition of general municipal election so that such elections occur only in even-numbered years.
Charter Amendment: To provide for the election of members of the Municipal Transportation Agency's Board of Directors, setting their compensation, and fixing their status as members of the Parking Authority Commission.
Charter Amendment: Require confirmation by the Board of Supervisors of the Mayor's appointments to the PUC Commission and to set qualifications for members of the PUC.
Resolution: Urging Mayor Gavin Newsom to return to the Municipal Transportation Agency positions and funds that are not directly relatead to the operations of the agency.
(doesn't look like the Board of Supervisors and the Mayor are getting along...) source: Board of Supervisors Agenda