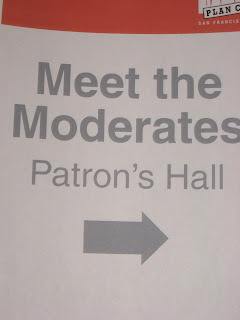 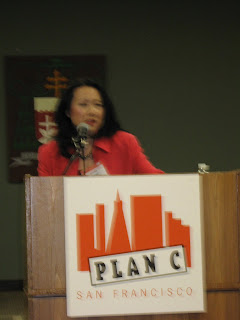 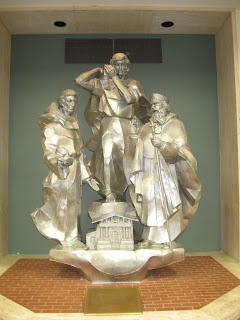 Meet the Moderates event was held last night at St Mary's Cathedral on Gough and Geary in their community meeting room.
Candidates invited by Plan C were given five minutes each to speak.
There was time before and after the speeches to speak to people individually along with generous refreshments.


The room was huge with statue of Patron's Saint Joseph, Saint Francis and Saint Patrick in the back of the room.

Mike Sullivan, the Chair of Plan C initially spoke and explained how important it was to pay attention and select new supervisors in the four "open" races in Districts 1, 3, 9 and 11 replacing Supervisors Jake McGoldrick, Aaron Peskin, Tom Ammiano and Gerardo Sandoval.

Joseph Michael Alioto - District 3 - Fourth generation San Franciscan (I believe he is the nephew of Angela Alioto.) He is an attorney dealing with anti-trust small business matters. He supports the ability to purchase affordable housing. Considering he was the first to speak - he was very articulate and later when I spoke to him - he was very charming.

Claudine Cheng - District 3 - Has been an active volunteer in community matters for over 20 years. Believes in home ownership. Claudine is the President/Chair of the Treasure Island Development Authority and an active member in SPUR. She is sensitive to development and wants to improve the quality of life in San Francisco. claudine@chengassociates.com

Eric Storey - District 9 -He is an activist in District 9 and believes he will bring new leadership to the Board of Supervisors. He has a great website - www.ericstorey.com. He believes Bernal Heights top stated concerns are safety, beautification and transportation.
eric@ericstorey.com, 415-826-3955, P. O. Box 2716, S.F. Ca. 94126

Lynn Jefferson - District 3 - Neighborhood activist for 15 years and an active member of North Beach Neighbors. She believes in the power of the community. She will answer questions, she will listen and she believes in public service.

Ahsha Safai - District 11 - He talked about the "forgotten neighborhood" with many people believing District 11 is really a part of Daly City. He talked about diversity of the district and how he wants to increase city services in the District. He believes in homeownership and smart growth including saving St Lukes Hospital. I believes he works for Mayor Newsom, and has been endorsed by Mayor Newsom for Supervisor in District 11. People were lined up to meet him after the speeches, which means he impressed people with his presentation. His website is under construction at www.ahshasafai.com

Alicia Wang - District 1 - A resident for over 15 years, she talked about being a mother and caring about the Richmond and the parks, parking, transit and home ownership. Alicia gave one of the best presentations of the evening. Alicia is the Vice Chair of the California Democratic Party and a superdelegate! Alicia Wang for Supervisor, 4930 Fulton Street #205, S.F. Ca. 94121 Phone: 415-750-1126; aliciawang@worldnet.att.net

Wilma Pang - District 3 - Has been active in San Francisco since 1976. Very active in the arts and Chinatown. Believes because of tourism District 3 his very important for the economy of San Francisco especially in regards to art, the city's culture and history.

Considering that this the supervisor races are still in their beginning stages everyone did very well and it was helpful that Plan C put this event together.

Other attendees included Supervisor Sean Elsbernd, Ron Dudum who said he was thinking of running in District Four (he reminded the audience that Plan C endorsed him in the last election where Supervisor Ed Jew won the election), Sue Lee who is thinking of running in District One, Clay Harrell and Mike Ege from City Democratic Club and Kevin Malone.
David Chiu was there, a candidate for Supervisor in District 3 - who did not speak but was there the whole evening (he was initially invited to speak and then asked not to speak).

I did my best with the information above, the best place to find information on the Board of Supervisor races is The Usual Suspects website www.sfusualsuspects.com - they keep up-to-date information all in one place. This website is a great way to start every morning!

SPUR - Win-Win Transportation Solutions - Speaker Todd Litman is the Executive Director of the Victoria transport Policy Institute, an independent research organization in Canada. He has been a part of numerous groundbreaking studies on the true cost of driving, transportation demand management, parking and much more. Special Time: 5:30 to 7:30 p.m. 312 Sutter Street, 5th Floor. Information: 415-781-8726 info@spur.org

The Panama Pacific Exposition of 1915 - Lecture with Nancy DeStefanis who discusses the history, what remains of the Exposition, and the birds who continue to visit. The Hawaii Pavilion at the 1915 Exposition introduced the ukulele. Ka'ala Carmack will perform songs with many of his students. Randall Science Museum, 199 Museum Way, Corona Heights, S.F. Free Information: info@randallmuseum.org

San Francisco League of Women Voters - League Membership Breakfast - How the League Really Does It 10 a.m. to Noon. Home of board member Suzanne Stassevitch, 1050 Filbert Street, San Francisco Learn about the League's positions at the local and national levels, and how they use these positions to influence policy. Refreshments. RSVP: 989-8683 or email lwvsf@wwsf.org s

*San Francisco for Democracy - The endorsement committee of SF4Democracy PAC meets to plan the endorsement process for the June, 2008 election. There will also be a meeting of the Political Affairs committee. 7 to 9 p.m. Ritual Coffee Rosters, 1026 Valencia Street between 21st and 22nd Street. 2 hour meeting. Political Affairs Director: Erich Albrecht at ehalbrecht3313@yahoo.com

Green in the City - Join SPUR Young Urbanists in a discussion about what it means to be green in San Francisco. Come hear Anne Vollen of Green Zebra; Peter Liu - initial founder and Vice Chair of New Resource Bank and Nikki Martinez of EcoTuesday. 6 to 7:30 p.m. Pacific Energy Center, 851 Howard Street, $20. for non members SPUR Young Urbanist Membership: $55. Information :415-781-8726 ex 120 . Young Urbanists is a new SPUR initiative that seeks to attract people 40 and under who appreciate San Francisco and are interested in deepening their involvement in civic affairs.

6th Annual Celebrity Crab Festival - Union Square - Fundraiser for the San Francisco 49ers Foundation. Food, beer and wine tastings. Noon to 3 p.m. Members of the San Francisco 49ers team up with local chefs to demonstrate the art of cracking crab. The noon time demonstration will be followed by a timed crab cracking and cleaning contest. For a minimal sampling fee, local restaurants will provides tastes of crab and sample beer and wine. Music from Diego's Umbrella, family entertainment including children's booth, and raffles. Meet 49ers Gold Rush Cheerleaders and 49ers Mascot Sourdough Sam. Admission is free. Tickets for food, beer and wine tastings $5 each or 6 for $25. Information: 415-781-7880 or www. unionsquaresf.net

Lobbyist's Training - 12 noon to 1 p.m. City Hall, Room 421. This training is for lobbyists, their representatives, the Board of Supervisors, member of the media, department heads, and other interested persons and is designed to explain filing and reporting obligations required by the San Francisco Lobbyist Ordinance. Information: Kristian Ongoco 415-252-3100. Please RSVP by 2-28-08.

Dee Dee Myers - "Why Women Should Run the World" Myers was appointed the White House press secretary for Clinton. She holds the distinction of being the first women and second-youngest person to occupy the position. Commonwealth Club 11:30 a.m. $15 non-members 595 Market Street, 2nd Floor S.F. Information: club@commonwealthclub.org