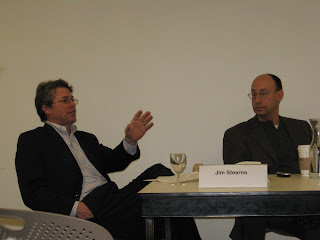 Interesting discussion about Tuesday's election. Even though it has only been one day David Latterman had put together a power point show with initial information.

Highest turnout, once again is District Eight. That is why the gay vote is so important - they vote. District Seven came in second in voter turnout.

Unlike the last election this election more people voted than sent in their absentee ballots. Some people might have voted differently for President if they had known Edwards was going to drop out, or they might have changed their mind about who to vote for.

Proposition A - Barack Obama campaign brought out more voters and was probably responsible for Proposition A passing. Kid issues usually do well in San Francisco.
Proposition 93 - Term Limits failed. Confusing proposition - people want term limits. It will be a long time before anyone tries to change term limits.
Presidential - Hillary Clinton won the absentee voters and Barack Obama won on election day. Clinton's support came from Latinos, Asians, women, older voters, Labor, Lesbian and Gay voters. Barack Obama did well with African Americans and white males. Class might have been a part of how people voted for president.
Barack Obama picked the states to work on Super Tuesday so on election day they picked up enough states (even if they were smaller) to "win the spin".
There was a discussion about super delegates in that they can vote for anyone. It would be a problem if going into the Democratic convention Barack Obama won the popular vote but did not have the delegate count.
Polling is difficult to do because of the "decline to state" voting.
Talked about the coming June election - which should be a lower turnout because the Presidential campaign was earlier.

"Love on Wheels" The San Francisco Bicycle Coalition's Love on Wheels. Come see the original 70's style dating game for cyclists. Rickshaw Stop, 155 Fell Street (between Van Ness and Franklin. Doors open at 6 p.m. Game at 7 p.m. free for SFBC Members Non members $10. Free valet bike parking. Lovelorn lovebirds each quiz three possible dates (hidden from their view) and choose one to ride off with, on a date provided by one of the Bicycle Coalition. All volunteers get a free movie ticket from the Balboa Theater. . Information: love@sfbike.org

Tango the Night Away at the Ferry Building - Ferry Building Milonga, an Argentine tango dance party to be held at the Ferry Building, Market Street at the Embarcadero from 5:30 to 8p.m. 100 dancers in the main hall to re-create the atmosphere of the grand dance halls that exist to this day in Buenos Aires. Information: 45-990-8135 Terence Larke teryclarke@hotmail.com

Celebrate Camp Mather- Friends of Camp Mather (FOCM) will present a special introduction to Camp Mather. You can also register for the Mather lottery. The event will feature music, Mather inspired art show and sale, a silent auction, lunch, kid's talent show and an astronomy program, a nature walk in the park and crafts project. 10 a.m to 3 p.m. at County Fair Building (9th Avenue and Lincoln Blvd). Free. Information: Claudia Reinhart at 831-6895 or claudia.reinhart@sfgov.org

SPUR - Transportation at the county line - The neighborhoods around the Bayshore Caltrain station will soon be home to thousands of new residents and work for thousands of new employees as the bayfill and adjacent lands are developed. Chester Fung, Senior Transportation Planner for the San Francisco County Transportation Authority, will present the preliminary proposals for serving the transportation needs of this bi-county area, including a new six-lane highway and freeway interchange, an extension of Geneva Avenue, an additional segment of the T-Third, and a new bicycle path. 12:30 to 1:30 p.m. 312 Sutter St. S.F. Fifth Floor. Bring your lunch. $5. for non-members. Informationinfo@spur.org 415-781-8726

Pacifica Democrat - Jackie Speier. Doors open at 9:00 a.m. Rear meeting room of the Sharp Park Golf Course Restaurant (Sharp Park and Francisco Blvds) in Pacifica. Jackie Speier has announced her candidacy for the 12th Congressional seat. A full breakfast is offered for $12; continental breakfast - $6; coffee only - $3. No purchase is necessary to attend. Reservations are recommended. RSVP Barbara Arietta V/P Publicity and Membership at 415-246-0775 or Frank Winston V/P Programs at 738-9400.